WATCH:  The southern resident killer whale population lost another baby this week. Researchers believe the newborn lived for only a few hours on Tuesday. The last successful birth took place three years ago. and this, most recent death is another devastating loss for the shrinking group of orcas. Mary Griffin reports.

A boatload of orange-clad tourist rounded the corner on Wednesday. It was another successful outing for a whale-watching tour.

“We saw a little bit of a humpback and some orcas. It was great. Transient and locals, ” Elder said.

Skipper Mark Malleson is used to seeing whales but on Tuesday morning near San Juan Island, he saw something unusual in a group of orcas.

“I stopped to have a quick look to see who they were through binoculars, saw there was a new calf swimming with them,” Malleson said.  “Then as I got the angle turned so I could actually see the saddle patch with the binoculars, [I] realized we’ve got resident killer whales.”

Malleson immediately alerted the Center for Whale Research, but by the time researchers arrived, it was too late. The mother, J-35, was desperately balancing her baby on her nose, trying to keep it afloat. But the newborn was dead.

“This is a population that is clearly struggling in terms of numbers,” Hall said.

“Having a newborn, there were a few, few moments of brief happiness, and then followed by disappointment and sadness.”

Two other members of J-pod, J50, and J52, were seen frolicking in the waters off Victoria several years ago.

J50 is now four years old, and now only the size of a one-year-old. There is a concern for her future.

“I think there is always hope. We have to remember wild animals can be quite resilient when the threat factors are removed or the situation changes, ” Dr. Hall said.

And the tourists, like Angela Heidt, are drawn to wildlife living in the waters off the island know the value of these animals.

“We’re so glad to have them, and we have to keep them safe, right?” Heidt said.

The last successful southern resident killer whale birth took place three years ago, but the good news, for now, is that the females are still getting pregnant. 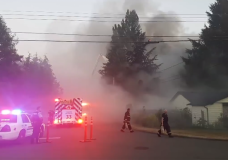 Cause of Comox house fire under investigation