Posted: Oct. 13, 2020 6:00PM | Last Updated: Oct. 13, 2020 6:15PM
CHEK
WatchIt's supposed to give a political party momentum. But the release of the BC Liberal platform this morning was overshadowed by sexist comments made towards an NDP candidate by a Liberal candidate during a party Zoom call. Mary Griffin reports.

The BC Liberals formally released their party’s platform on Tuesday ahead of the upcoming provincial election on Oct. 24.

The Liberals, led by Andrew Wilkinson, say they are offering a “bold vision” for British Columbia and are hoping they can help struggling small businesses, create jobs, and invest in public services.

“British Columbians are deeply concerned about their future and we need strong, disciplined leadership to get us through this once-in-a-century challenge,” said BC Liberal Leader Andrew Wilkinson. “British Columbia was once a place of incredible opportunity — the plan we are introducing today will help get us through this pandemic and back to a place where everyone feels they belong and where everyone has a chance to succeed and get ahead.”

The BC Liberals highlighted the following actions they hope to accomplish, if elected:

Wilkinson, presented the plan during a press conference on Tuesday, highlighting how the COVID-19 pandemic requires all governments to take extraordinary measures.

“At a time of such uncertainty and worry, British Columbians need a leader with real-life experience, which I have — having practiced both law and medicine — versus a career politician and lobbyist like John Horgan,” added Wilkinson. “The BC Liberal plan is built on the fundamental optimism our team has in British Columbia’s future. Once we are through this crisis, the BC Liberals will ensure we get back to balanced budgets, consistent debt reduction, and strong, long-term fiscal management that guarantees a bright future for our kids and grandchildren.”

Wilkinson and the BC Liberals feel their plan “will restore confidence and rebuild B.C.”

The BC Liberals’ plan was released the same day that all major party leaders are slated to partake in a live televised debate.

It also comes at the same time the Liberals face criticism for comments a candidate made about the physical appearance of the NDP’s Bowinn Ma.

The comments made by Liberal candidate Jane Thornthwaite during an online roast on Sept. 17 to honour the retirement of Ralph Sultan have been widely condemned as sexist, since the video was posted online over the weekend.

Ma has said Thornthwaite “sexualized” her interactions with Sultan. On Twitter, Thornthwaite acknowledged that her comments “were inappropriate” and she apologized to Ma.

Wilkinson was peppered with questions during the platform launch about why he laughed at the jokes instead of stopping them, replying that he was “embarrassed to the point of being appalled” but did not feel he needed to say anything to Thornthwaite.

“There’s no place for those kind of sexist remarks in our society period. I want to apologize to Bowinn Ma and commit that we will all work very hard to do better.”

Advanced polls are also set to open this week, starting on Oct. 15 and running through to Oct. 21. 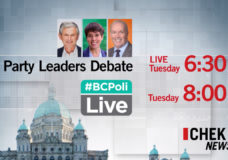 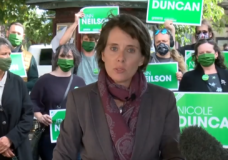