WATCH:  The amazing surf scene on Vancouver Island brings people from all over the world and eager to catch those waves is an eight-year-old surfer from Peru. He and his family moved to Sooke just two months ago and as Luisa Alvarez tells us, at such a young age he’s already making a name for himself in the Tofino surfing scene.

Every time he gets ready to surf he waxes his surfboard with precision and care. Just by looking at him you can just tell surfing is his life.

At just eight-years-old he already takes on the ocean like a pro and says being on the water is where he’s the happiest and truly feels free.

His father, Marten Barrenientos, says his son has always loved the ocean.

“He goes nuts when he doesn’t go to the ocean,” said Marten.

Maui and his family moved to Sooke just two months ago from Peru, looking for a better life and some of Canada’s best surfing.

So far Maui says he is really impressed because according to him the waves in Peru don’t even come close.

“The waves in Canada are for more advanced surfers,” said Maui.

“You have to be faster and move quicker in order to catch them.”

One of his favourite beaches to surf is Sombrio beach near Port Renfrew.

His love for surfing comes from his father who has been surfing for over thirty years. Marten says having his son love his passion as much as he does is indescribable.

” I don’t have words to describe that it’s amazing,” said Marten.

As Maui’s coach, he continues to fuel that passion and together they train daily, whether it’s on the water or on land.

“He trains in yoga first and stretching, a lot of stretching and then on the ground he does a lot of exercises in accordance with surfing, like surf squats and rotation moves,” said Marten.

Another one of Maui’s training tools is the skate park where he uses a skateboard as a surfboard mimicking what he needs to be doing on the water so his body knows exactly what to do when it comes time to catch a big wave.

And their dedication to the sport thus far has clearly paid off. Maui recently competed in an international surf competition in Tofino and brought home second place.

Barrenientos says “it was very difficult conditions but he made it.”

He adds this is just the beginning.

“Maui is very hard working he is really dedicated.”

They plan on competing again and travelling to competitions in the states.  Maui hopes to compete at is the 2018 Rip Curl Gromsearch Series in California and Florida, and are hoping to attract sponsors.

Because his dreams aren’t small.

“I want to be a world champion,” said Maui.

And when that happens he says he will be representing Canada his new home.

Life is better with a friend ?? @carecaboladaobc 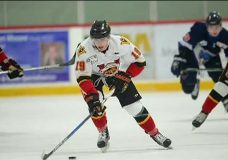 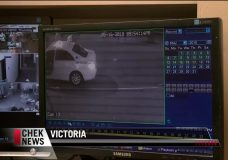 Is Victoria a safe city? Mayor, police and community discuss