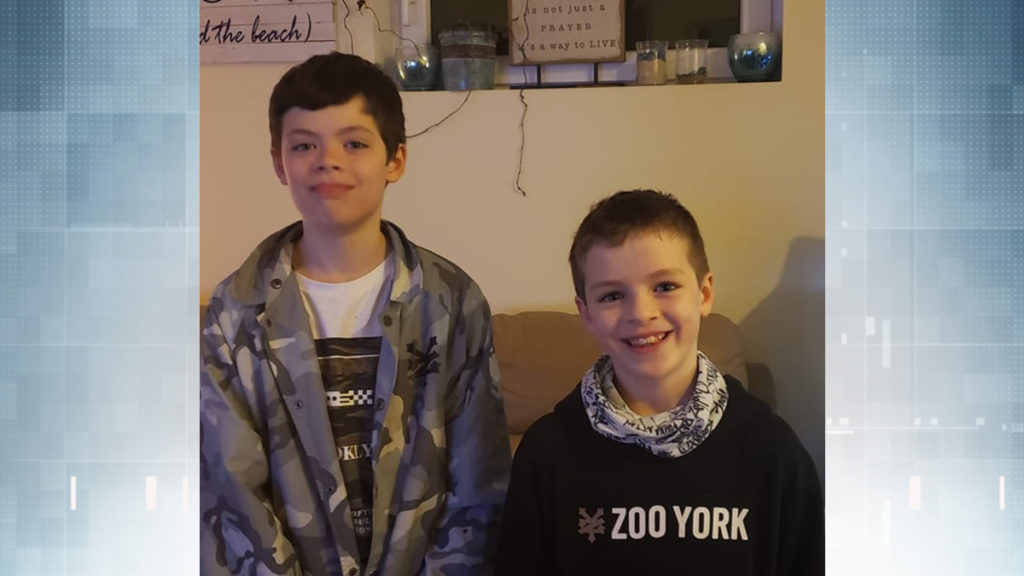 Aaron Johnson
Jesse, 12, and Wyatt Johnson, 8, are shown. For 45 terrifying seconds, Wyatt was trapped in a stolen vehicle driven off by a random woman.

It was a terrifying 45 seconds for Aaron Johnson and his two sons.

On Thursday, Johnson had pulled up his pickup truck to the Shell station in Qualicum Beach to purchase 12-year-old Jesse and 8-year-old Wyatt Playstation 4 gift cards for helping with yard work.

“I was literally inside the store for 45 seconds, and I came out and the truck was gone,” Johnson told CHEK News.

Jesse had come into the store with his dad, but Wyatt was still in the truck when a random woman climbed inside and took off down Old Island Highway at around 3:30 p.m.

The youngster banged on the truck windows until the woman let him out down the road. He came running back yelling to his father that the truck had been stolen.

“He was just shocked for that 30, 45 seconds that he was in the vehicle,” said the concerned father.

After Johnson called the police, the woman’s mother arrived at the gas station and explained to Johnson her daughter’s struggles with drug addiction.

It’s something the father is all too familiar with, having nearly lost his family during his own struggles with alcohol and crack-cocaine addiction. It’s also the reason he’s not pursuing charges against the truck thief.

“My wife walked out on me with my kids and I had a successful construction company, life was going good, I had employees, and I almost lost everything to addiction,” he said.

These days, he said he stays sober by offering help to others.

“I want to turn my property into a treatment centre, that’s been my vision for the last couple of years.”

The woman drove as far as Errington before calling her mother on Johnson’s own cell phone that he had left in the truck. He spoke to her and calmly convinced her to return it one piece, hugging her as she exited the truck before she was arrested.

Now, the father is taking it a step further and trying to get the woman help.

“I got ahold of a local female outreach worker friend, and she’s on her way to go detox and seek treatment,” said Johnson.

As for Wyatt, he was shaken, but not too upset, and will see a councillor next week, Johnson said.

It was his son’s own empathetic response that ultimately led Johnson to decline to press charges.

“I asked him, ‘what do you want dad to do? Would you rather see this lady seek some help and get treatment or would you rather have her go to jail?’ he said.

“My boy’s got an empathetic heart too and he knows what dad’s been through.”

Your Money for February 19