February 8, 2020 updated
CHEK
WatchThe dramatic rainfall and flooding of the Cowichan Valley are draining the funds of a Duncan area horse rescue.  With the cost of shavings skyrocketing in the wake of the WFP strike, it's now costing thousands of dollars to keep horses out of the mud.

Exhaustion is setting in at Humanity for Horses Rescue in Duncan where record rainfall has flooded pastures and overwhelmed volunteers trying to keep horses dry.

The ground is so saturated by the record rains that fields have turned into ponds.

It’s a nightmare situation for the rescue that was hoping to close its doors and adopt out its horses that were saved from slaughter. Instead it is responding to horses in need of vet care from here and away due to the non-stop moisture.

“Which is creating problems with thrush and mud fever,” said Sanesh.

“So we’re trying to keep them in as much as possible and we got horses standing in the barn alleyway. And then there’s the forestry strike so you can’t get shavings and the shavings you can get are so expensive.”

With 41 horses still in the rescue’s care, keeping them in day and night is costing the rescue thousands of dollars. Over $12,000 has been raised through a GoFundMe campaign to help.

“Keep the horses somewhat dry, and that’s money that would normally be going to our hay bill.”

Yet the wild weather isn’t over yet.

“So we have special weather statements out for Georgia Strait,” said Meteorologist Armel Castellan with Environment Canada. 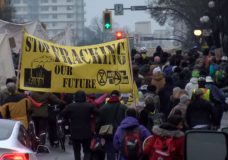 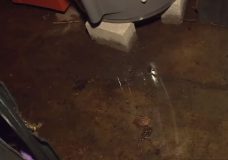