A new modelling system released today by provincial health officer Dr. Bonnie Henry showcases that the recent measures put in place in BC are working to help limit the spread of COVID-19.

Data suggests travel restrictions and social distancing measures are beginning to have an impact and the trajectory of new cases in B.C. changed from a 24 percent average daily increase to 12 percent as of March 21, but experts aren’t ready to predict that the curve is flattening.

“March 13th was when we announced major travel restrictions when we announced some of the major orders and restrictions on movement and we started implementing the important physical distancing measures,” said Dr. Henry at a press conference in Victoria. “To me when I look at this curve, I know that there are people that were exposed to this virus prior to that date who are going to become sick in the 14 days after their exposure so it is not surprising that we are seeing that, in the last ten days, that people are coming ill.”

Dr. Henry says that we are going to start to see the true impact of these measures in the next two to three weeks.

“I’m trying not to over-call it, but I do believe we are seeing a flattening or a falling off of that curve,” said Dr. Henry.

Courtesy of BC Government

Dr. Henry points out that the grey line on the above chart is the trajectory BC would have been on if preventative measures had not been put in place back in the middle of March. The red line outlines where the province currently sits in regards to the cumulative number of COVID-19 cases.

The data does show the curve flattening, however, Dr. Henry did try to keep expectations at bay.

“Again, I just want to say these are not predictions, there actually using of data to help us plot a course that we can all get around and understand how we might be able to respond to our pandemic as it evolves in BC.”

In addition, BC’s top doctor called upon residents to continue to follow the advice of health experts in order to keep the curve trending downward.

“What we need, though, is for everybody to continue to pay attention to these measures so we can continue to prevent transmissions in our communities for the coming weeks.”

The province is still preparing for a surge in hospitalizations, but are feeling like they are prepared when that happens.

BC Health Minister Adrian Dix highlighted that if our confirmed cases were to reach a Hubei-like epidemic level with high demands for bed capacity and ventilator capacity, he said “we are reasonably focused on being able to handle that.”

Dix outlined 17 of the province’s biggest hospitals are now identified as primary COVID-19 treatment sites. That list includes Victoria’s Royal Jubilee Hospital and Nanaimo Regional General Hospital. According to Dix, health officials believe those 17 sites have enough capacity to meet the expected demand, however, the province is preparing additional centres for overflow if required. 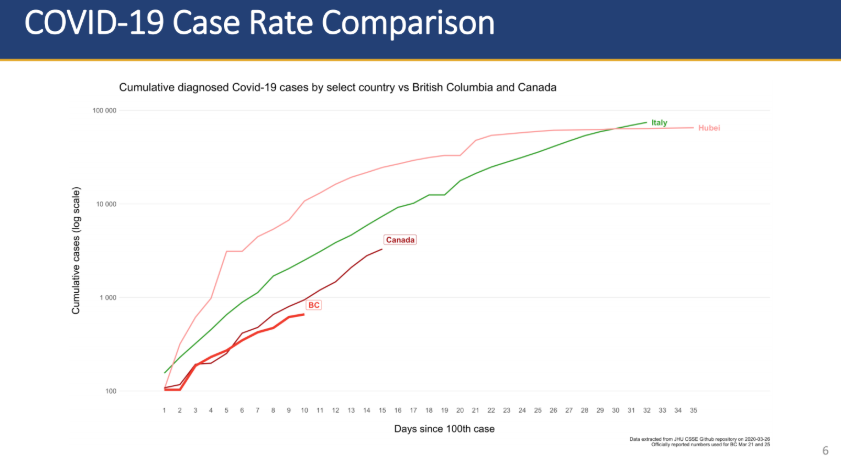 Courtesy of BC Government

In addition to comparing BC’s current situation to Hubei, the province in China where the outbreak began, they also looked at our trajectory compared to Italy.

According to the data presented, Dix said that if the province were to reach outbreak levels of Italy, that B.C. would have to use all sites in order to meet bed demand and new systems would be deployed in order to transport patients between them.

With hospitals prepared and social distancing measures in place, health officials are saying this will “buy time” as research towards a widespread vaccine continues.

It will also allow the BC Government to put their efforts towards other priorities.

Authorities are now focused on putting in place a four to six-week clinical staffing schedule along with the redeployment of medical staff to support critical care, according to Dr. Henry.

Both the provincial and federal governments are also focused on securing additional protective equipment in the coming months. 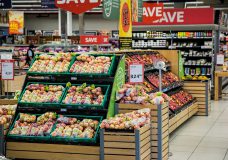 An extensive list of all essential services in BC, outlined by government 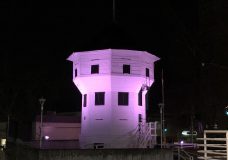