Dogs may soon be required to be on-leash at Mount Doug Park, leaving community divided

Tensions are brewing in Saanich over a possible bylaw change at one of the region’s most popular parks, which would require all dogs to be on-leash in Mount Douglas Park.

Donna Ryan, a Saanich resident, regularly goes for walks with her dog Coco at the park, but is now worried this experience will soon be banned.

“I’m quite upset about it because there’s not a lot of places that you can actually go for a good hike. There are some off-leash parks, but that’s totally different,” she said.

Other dog owners agree and say they’re responsible and have control over their roaming canine.

“It’s just freedom to be able to walk with your dog and not having to constantly be pulled and not have your friend tripping over your dog over your leash,” said dog owner Shelley Brynjolfson.

“I would probably frequent the park less because I’d probably choose places where I could be off-leash,” said Erika Herrmann, another local dog owner.

But for other park-users, the environment comes first.

“I totally think in a park like this they need to be leashed. The ecosystem is too vulnerable for them to be running around and also they disturb other people and other dogs,” Sandi Coop said.

And she’s not alone — Darrell Wick, the president of Friends of Mount Douglass Park Society and his group are hoping the motion goes through.

“They’re chasing wildlife. We often see people calling their dog because their dog has smelled a rabbit and is chasing after him,” he said.

“We know that during COVID, there’s an increased impact on mental health and mental wellness. People get out of the park to feel mentally good about themselves, but if they come to this park and they’re challenged by dogs off-leash, they don’t feel secure,” he said.

Haynes added that there are plenty of off-leash parks in the area for dog owners to visit.

Council will vote on the motion on Monday. 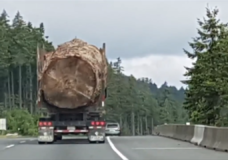