DFO warning people to stay away from orca in Comox Harbour

WATCH: The transient killer whale known as TO73B has been staying in and around Comox Harbour since last Monday thrilling crowds of people and puzzling researchers.

The transient killer whale from Alaska has been putting on a show in Comox Harbour since it arrived last Monday.

“We saw the orca at the marina and it was breaching the water,” said Amanda Eigler. “I got some good pictures of it jumping.”

People have been lining the Comox pier all week hoping to catch a glimpse of the orca since word got out on social media.

“Well, we just saw it breach twice which is why I came to see if I could see the size of him. He’s a beautiful, huge whale,” said Marny Elliott.

The orca, known to researchers as T073B, was seen last weekend transiting down Georgia Strait with a pod of orcas but for some reason, it split off and has been hanging around Comox ever since.

Department of Fisheries and Oceans researchers say it’s not uncommon for transients to spend time alone, but usually not this long.

The orca has been seen as far south as Union Bay and just north of the Comox Harbour, near the mouth of the Courtenay River right beside Ramona Johnson’s home on the K’ómoks First Nation on Comox Road.

Even band elders say they’ve never heard of an orca being this far up the estuary.

“My husband got up Sunday at 6 a.m. and came outside and it was right here so he got a nice clip of it,” said Johnson. “I actually phoned my elder Mary and said wow there’s a whale here and she can’t remember one in her lifetime of somebody saying there’s been a whale through here.”

Another incident on the weekend included a sailboat being pulled around by the killer whale as it played with the anchor line under water.

DFO officials have been watching the orca very closely.

They still don’t know why the orca has stayed in the area and is not convinced the orca is eating properly so it doesn’t know if it is healthy.

Researchers will be watching it over the next few days, but its interactions are now becoming more of a concern.

Pictures have been posted online showing people in kayaks and on stand up paddle boards rowing very close to the orca.

Towers says scenes like that are irresponsible and against the law adding that people in any kind of vessel need to respect the 200-metre “no go” zone around an orca.

On Monday, the Canadian Coast Guard vessel M. Charles which is in charge of fisheries enforcement was in the Comox harbour keeping an eye on the situation. 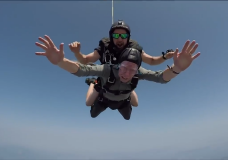 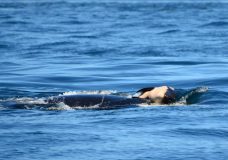