For many, deer have been a constant nuisance in Oak Bay for years.

“It gets a little scary we have a small dog. They’re not afraid of you at all, they’ll approach you very aggressively,” said Dave Cornock of the Oak Bay Flower Shop, adding. “I’m concerned about it, I hope something will be done about it.”

And the District of Oak Bay did do something about it. Instead of culling the deer, the Urban Wildlife Stewardship Society gave the does contraceptives last fall to slow down their population growth.

“The goal of the project is to manage the urban deer population, in a nonlethal way,” said wildlife veterinarian Adam Hering.

So far, Hering says the project has managed to vaccinate approximately 75 per cent of Oak Bay’s deer population with birth control.

And while the project seems to have helped control deer procreation in Oak Bay, controlling the deer population in the region is a little more difficult, particularly if Oak Bay is the only community making a real effort.

“It would be kind of pointless for Oak Bay to be doing it and nobody else to do because the deer just don’t recognize those borders,” said Corncok.

Hering says the solution to the regional deer problem is a widespread contraceptive method across municipality lines, instead of culling, as this can create what is called a “vacuum effect”.

“Deer from other areas – because you’re not going to cull the entire peninsula – they’re going to work their way in and say ‘oh look this is a very nice area with great bedding and lots of food lets go here,'” said Hering. “This project allows reduced population growth while keeping animals in the area.”

For now, Hering says anyone who spots un-tagged does in Oak Bay, should report them to the Urban Wildlife Stewardship Society, so they can tag them. 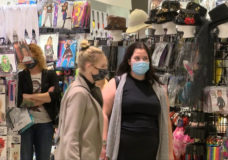 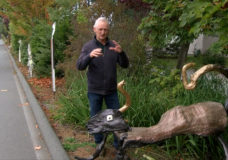