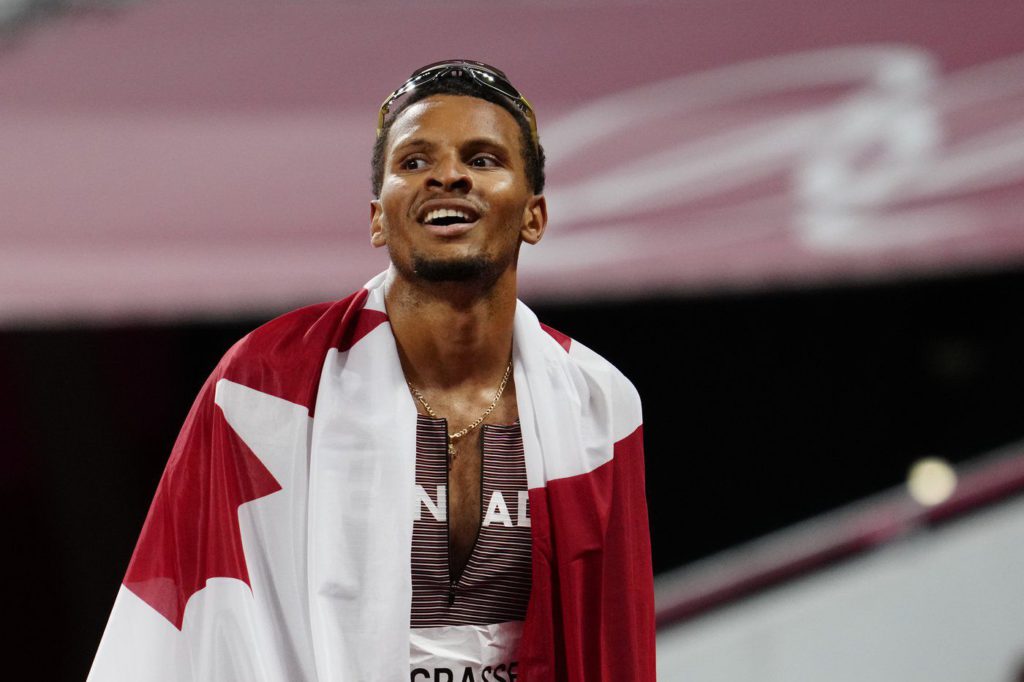 CHEK
Canada's Andre De Grasse smiles after racing to a gold medal in the Men's 200m final during the Tokyo Olympics in Tokyo, Japan on Wednesday, August 4, 2021. De Grasse launched his own signature wine at a posh party on Tuesday night, with a strip of red Mondo track and a pair of starting blocks in place of a traditional red carpet. Casa Loma and the Toronto city skyline made for a stunning backdrop. THE CANADIAN PRESS/Frank Gunn Frank Gunn

Andre De Grasse launched his own signature wine at a posh party on Tuesday night, with a strip of red Mondo track and a pair of starting blocks in place of a traditional red carpet. Casa Loma and the Toronto city skyline made for a stunning backdrop.

The evening was part of the Canadian sprinter’s jam-packed trip home to Toronto of meetings with sponsors, participating in a panel at the Elevate Festival, and even a day on a TV set, shooting scenes for an upcoming episode of a TV series.

Experts in athlete branding say the business has drastically changed over the past decade. It’s become almost as much about mining athletes’ interests off the playing field as their success on it.

“I’m getting more comfortable,” De Grasse said in an interview with The Canadian Press. “When I started, everything was pretty overwhelming, everything happened pretty fast for me. I didn’t know what to expect. I got pulled in so many different directions.

“And I was just so focused on track — train, compete and do it all again.”

Since signing an eight-figure deal with Puma when he turned pro in 2015 — the richest first pro contract in global track and field history — he’s inked numerous partnership agreements, he’s penned his own children’s book, and now has a limited edition wine called “19.62,” a nod to his winning 200-metre time at the Tokyo Olympics, with proceeds going to his foundation.

“People have given me mentorship and advice about things that are important to me, around cementing your legacy, or what you want to be known as,” De Grasse said. “That whole thinking around ‘more than an athlete,’ (a catchphrase made famous by LeBron James), that kind of got me inspired and motivated to do things that I liked to do and get out my comfort zone a little bit.”

The 27-year-old said the visit home was a chance to recharge, particularly after a challenging season that saw him contract COVID-19 twice, including less than a month before the world championships where he failed to make the 100-metre final and then withdrew from the 200. He bounced back to anchor Canada to a thrilling victory in the 4×100-relay.

His teammates Aaron Brown, Jerome Blake and Brendon Rodney all attended Tuesday’s launch of the wine from Pillitteri Estates Winery.

“When I first started working with athletes, it was like ‘Can I get a car? Can I get a phone? Can I get 2,000 bucks to show up and sign autographs?'” said Lamont. “Now, the first conversation is never about sports. It’s like: ‘I like makeup. I love fashion. I love music.’ It’s rarely ever both the sport they play, and it’s all about their interests outside of their athletic endeavours.

“They almost see themselves as two different entities. One is their job. The other is their passion point. And the smart ones are able to monetize both.”

Outside interests also increase engagement with athletes, Lamont said. Oleksiak, for example, was scheduled to climb Mount Kilimanjaro this month to shine a spotlight on the global food crisis. Knee surgery, however, derailed her plans.

Brian Levine, the president of Toronto-based Envision Sports and Entertainment, who represents De Grasse, points to NBA players as athletes who do an exceptional job of transcending their sport.

“They’re not shy, generally speaking, to weigh into political issues, social impact,” Levine said. “It’s a sport that welcomes individuality. There’s also an overlap with the world of hip-hop and fashion.”

Among the Canadian survey’s six key metrics were: “I know who this is,” “I like them,” and “I would like to meet them.”

De Grasse scored top marks across the board.

“Andre is amazing on a few levels,” Lamont said. “He’s succeeded in sport on a consistent basis for a while, he started young and his back story (he was spotted in a high school race running in basketball shorts with no starting blocks) is engaging. It’s very Canadian. Never expected to make it, just showed up at the track.

“Alphonso Davies (who was born in a refugee camp) has a great back story. Penny Oleksiak went from high school student to Olympic gold medallist in days. It’s also the fact that it happened to them when they were young, so they were able to build a following. And they’re respected by peers, they’re liked by an older generation, and they’ve connected to the younger generation.”

Lamont said diverse interests can continue to pay off in retirement. An athlete’s career usually ends in his or her 20s or early 30s. An athlete can go from making millions to next to nothing overnight.

“Cash used to be king, now equity built empires,” he said. “Athletes have heard the horror stories about retiring and being broke in two years. So rather than thinking short-term … if they get a percentage of a company ownership, they’re now in the game, they’re now thinking it can pay me when I’m sleeping, 10 years from now, when I’m no longer playing.”

De Grasse, who became Canada’s most decorated male Olympian in Tokyo with three medals, giving him a total of six, said while writing the speech he gave Tuesday night he thought a lot about his humble beginnings at Coffeyville Community College in Kansas.

“It’s a surreal feeling for me to be able to have this opportunity,” he said. “I’m just enjoying it while I can, because it doesn’t last forever, and when things come knocking on the door, I want to see where they go, because I never thought I could do something like this.”

He doesn’t take any of it for granted.

“I still get those feelings of: I can’t believe I’m actually here,” he said.

De Grasse’s aunt spotted him in an ad in an Oakley store last week in London.

“She sent me a picture, I was super happy and grateful,” he said. “That still feels really good.” 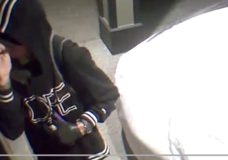 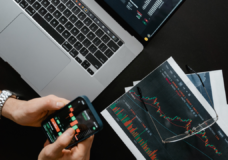