WATCH: A volunteer-run organization is taking seniors beyond the confines of their care home and into the city by bike. Ceilidh Millar reports.

There’s nothing like feeling the wind in your hair and the sun on your skin while riding a bicycle on a nice summer day.

A new program in Victoria called Cycling Without Age is bringing that joy back into the lives of the elderly.

“It’s all about getting seniors out into nature and the community by bike” said Carson Sage, the co-founder of the Victoria chapter of Cycling Without Age.

The volunteer-run organization takes seniors from care and nursing homes out on free rides in their community using a specialized bike called a trishaw.

“It’s been specifically designed for the program and has an electric assist on it,” said Sage. “It really allows a wider range of people to volunteer.”

The idea started in Copenhagen, Denmark in 2012.

There are now more than 1,000 bikes in 28 countries across the world, but this is the first of its kind in B.C.

Sage and his team have partnered with Beckley Farm Lodge, a seniors living home, to bring the trishaw bike to their residents.

“This is a program that is really going to grow in the city,” said Lorraine Gee, the manager of Beckley Farm Lodge.

There are stories of seniors improving not only their mental health but also their physical state from the renewed sense of freedom, friendship and fun through the program.

“If they’ve had a really good day they’ll come back, they have less pain and are happier” explained Gee.

John Roberts suffers from dementia and is a resident at Beckley Farm Lodge.

His wife, Jane Roberts, a bike ride was something they hadn’t done together in years.

“John got to see a lot more than he would normally see,” said Jane Roberts. “We had a lot of fun!”

The Victoria chapter has received a grant from the City of Victoria for a second bike at the Cook Street Village Activity Centre.

They are looking for additional funding and sponsorship to make the program accessible to others.

“We’re hoping that as many facilities in Victoria can have a bike of their own,” said Sage.

For more information on Cycling Without Age Victoria, visit their Facebook and fundraising page. 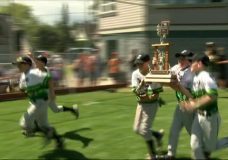 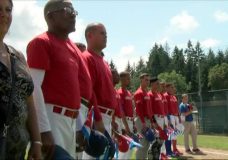