WATCH: Rogers Hometown Hockey is casting a national spotlight on the Cowichan Valley this weekend. The broadcaster is putting on a number of events as part of it’s travelling roadshow.This is the third time Rogers Hometown Hockey has come to Vancouver Island and local organizers are excited by its return. Kendall Hanson reports.

There is little doubt hockey is part of the fabric of the Cowichan Valley, which is a major reason Rogers Hometown Hockey is in the region this weekend.

The Cowichan Valley is home to the world’s largest hockey stick, the Cowichan Capitals Junior A Hockey Team and five ice arenas.

“And a lot of those facilities are participating in this Hometown Hockey event,” said John Elzinga, the Rogers Hometown Hockey Cowichan co-chair. “There are events right across the region. Hockey is big for us.”

The travelling road show that occurs during the NHL season is spotlighting the region in a national broadcast Sunday. It’s previously made stops to Nanaimo and Victoria.

One of the local organizers says Canadians will be impressed by what’s highlighted about the region.

“[It] really shows how beautiful of a place we really live in and how lucky we are and it’s going to be broadcast across Canada so it’s absolutely tremendous for our community,” said Ernie Mansueti, the other Cowichan co-chair hosting the event.

On Saturday, visitors were able to take part in interactive hockey displays, watch some hockey star hopefuls compete at ball hockey and get signatures from NHL alumni including former Canuck Brendan Morrison.

“To be able to come here and have Duncan as a focal point and see the enthusiasm from the crowd here today it’s fabulous,” said Morrison.

And the event’s climax will be Sunday. Organizers are hoping for a strong turnout from across Vancouver Island.

“There’s entertainment all day from 12 [o’clock] right through to the television broadcast at 3:45,” said Elzinga. “We got all of our minor hockey teams participating in a parade to open the actual broadcast. We’re hoping for 700 kids. that’s the number that we’re hearing and we’re really looking forward to that.”

It’s a big opportunity for the Cowichan Valley to not only showcase itself but highlight its ties and love for Canada’s game. 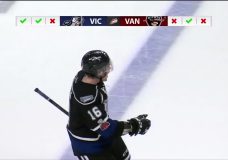 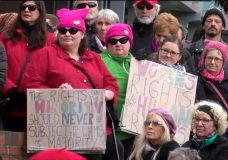