October 11, 2019 updated
Chek
WatchCats owners were fearing the worst before they got a call with a sighting of their cat

Their cat, named Artemis, dove from their sailing boat during a trip to Desolation Sound two months ago and couldn’t be found.

But this week, perhaps a couple of lives short of nine, their cat came back.

“It seems like a miracle. It seems like it was orchestrated somehow,” said Bethanny Brooks, one of the cat’s owners.

The Cowichan Bay couple were on a 23-day sailboat trip to Desolation Sound. They say it was going remarkably well until day 11, July 30th. While anchored off the edge of West Redonda Island, their Manx cat of five months that they adopted from friends decided to suddenly jump ship and swim the six metres to shore before quickly disappearing.

“Utter amazement. Cats just don’t do that. They don’t dive into the water, let alone the ocean,” said Gregg Cooper, the cat’s other owner.

They followed him to shore and spent the rest of the day and night trying to find their cat.

But as they were travelling with friends, they carried on with their trip. They doubled back three days later to search again and leave a missing cat poster. Again they had no luck.

“You feel heartsick,” said Cooper. “I mean this is a house cat that’s out in a place just rocks and trees.”

They were beginning to lose hope when this past Friday they got a text message.

“I just about fell out of my seat when I read it,” said Brooks.

Courtenay resident Scott Francis had spotted Artemis on the Island and seen their poster.

Armed with GPS coordinates, the couple returned in a friend’s speed boat yesterday to find Artemis.

“He started calling his name and he got his name out three times and all of a sudden he heard a meow. I was just like so excited,” said Brooks.

They say it shows you can never write a cat off. It shows just how resourceful cats are as Artemis, while certainly skinnier now, survived more than two months in the wild. 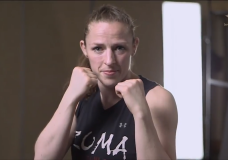 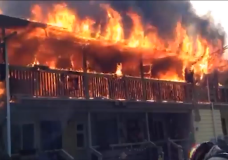