COVID-19 vaccines to roll out for priority groups in early 2021: Feds

Deputy chief public health officer, Dr. Howard Njoo indicated on Thursday that the first batch of COVID-19 is expected to be delivered during the first three months of 2021, but supplies will be limited initially.

“There has been a great deal of preparation taking place behind the scenes to ensure Canada is well-positioned to obtain COVID-19 vaccines and, building on our well-established systems, provide access to every Canadian who wants one in 2021,” Dr. Njoo told reporters on Thursday.

Those first in line will include seniors and people with serious health conditions.

Njoo also says that essential workers such as nurses, doctors, police officers, and firefighters will be near the top of the list as well.

Ottawa has inked final agreements with five vaccine makers and is in advanced negotiations with two more. The deals would secure 194 million doses with the option to buy another 220 million more, said Arianne Reza, the assistant deputy minister of procurement for Public Services and Procurement Canada.

Despite having deals in place, each vaccine will still need approval in Canada, which is currently a work in progress. Dr. Njoo says most of the vaccines are in the final stages of testing before they can go to Health Canada for approval.

The chief medical adviser at Health Canada says Pfizer’s COVID-19 vaccine candidate could be approved in Canada next month.

Dr. Supriya Sharma says the Health Canada review is most advanced for the vaccine being developed by Pfizer and BioNTech.

She says Canada is reviewing it alongside the United States and Europe and expects it will be approved here at the same time it is given emergency authorization in the U.S.

The U.S. Food and Drug Administration is meeting on Dec. 10 to consider whether to give the go-ahead to Pfizer.

Canada has a purchase deal to buy at least 20 million doses of Pfizer’s vaccine, with the first four million of those on track to arrive before the end of March.

Sharma says she expects the first shipments of the Pfizer vaccine in January but it is possible Canada could begin receiving the first doses before the end of the year.

Although Thursday’s announcement on vaccines seems promising, the Trudeau government has been in the hot seat this week, after the prime minister acknowledged that some countries will get COVID-19 vaccines before Canada does, because Canada doesn’t have the capacity to make them. 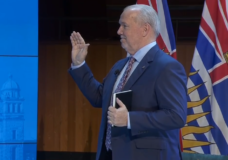