An increased stream of ambulances are responding to calls in Topaz Park, temporarily set up as a homeless encampment to house Greater Victoria’s homeless during the COVID-19 pandemic.

“I think we are going to see spikes in overdoses because it’s been more difficult to access overdose prevention services,” said Bernie Pauly, a scientist for the Canadian Institute for Substance Use Research.

COVID-19 harms many vulnerable populations, but drug users are dealing with unique challenges.

“The risks of overdose have been escalated by the COVID public health emergency,” said Pauly.

“People are being told to physically distance, to self isolate at the same time we’re saying to people don’t use alone, to prevent overdoses.”

“If we were planning these as two public health emergencies [the plan] should have been intermingled from the outset,” said Rachel Phillips, the executive director of Peers Victoria Resources Society, which provides an array of outreach and drop-in harm reduction and support services in the area.

“I think people are scrambling right now to do that now, but it should have happened right at the beginning.”

The province, says they’re on it.

“B.C. released new clinical guidelines for healthcare professionals to immediately implement that federal exemption to help reduce the risks – withdrawal, overdose, infection, and other harms – to a vulnerable and often-immune compromised population,” said the Ministry of Addictions in a statement.

But while there are guidelines to allow doctors to prescribe safe, alternative drugs for users, scientists like Pauly say there’s no plan or resources to implement the guidelines.

So the scramble to respond is landing on people like Fred Cameron, and harm reduction organizations like Victoria’s SOLID Outreach.

“It shows that our system is broken,” said Cameron who is the operations manager at SOLID.

The safe consumption site Cameron once worked at was closed weeks ago due to COVID-19. Now, he’s trying his best to providing harm reduction equiptment for whoever he can, from his backpack.

Compounding the problem, not only are safe consumption sites closed, the drug supply is being pinched as borders seal up.

All this is leading to panic for drug users, and many are substituting their normal drugs of choice with ones they’re less familiar with. That, is making dosing less reliable and experts say, likely will increase overdoses as a result.

“Housing is the key piece, but that doesn’t work for this community without having a safe supply,” said Cameron.

“If we were able to have supply out there, that people could get without panic…that would allow them to sleep better, eat better, and crime would go down.”

A daunting combination of services, to save lives for one crisis while battling another.

The full opioid report for the months of April and May will be out from the province mid-May. 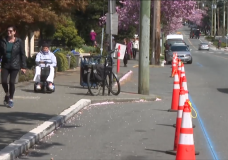 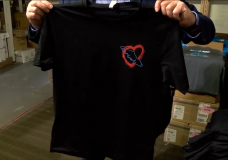 CHEK Upside: 'This is a real team effort': Islanders band together in creating custom Rock for Relief T-shirts