The CH-47 Chinook helicopter now owned by Coulson Aviation used to be a US Army helicopter but after an 18-month refit in Port Alberni, it’s about to head to Southern California to begin its second life fighting wildfires.

“The CH-47D is the largest super heavy helicopter in the firefighting arsenal today,” said Britt Coulson of Coulson Aviation.

It has a 3,000 US gallon tank, the same as another Coulson CH-47 flying in California right now and they can fill up the tank in just one minute using a snorkel that drops below the chopper as it hovers over water.

What makes the lastest of four CH-47s owned by Coulson so different is the state of the art avionics and night vision goggles certification (NVG.)

“So this will be the first super heavy to ever be doing NVG fire fighting and it will be running 24 hours a day supporting the wildfires down there,” added Coulson.

Fighting the wildfires in Los Angeles at night with this machine should give firefighters the upper hand.

“The fire doesn’t sleep at night and at nighttime, the temperatures go down, your humidity goes up and typically you have less winds, so between the weather effects and less fire fighting aircraft in the air at night you’re able to increase productivity quite a bit by fighting a fire at night,” added Coulson.

The CH-47D could be headed to Los Angeles as early as Wednesday on a contract that runs to the end of 2020. 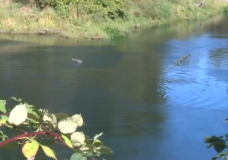 Salmon pool in Vancouver Island rivers ahead of rainstorm 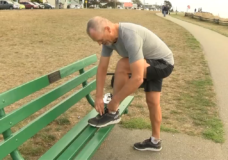