The Canadian Coast Guard says four containers from a cargo ship that lost more than 100 of them were found washed ashore on the north end of Vancouver Island.

In a Facebook post, the Coast Guard said one of its helicopters spotted the units near Cape Scott, where drift modelling predicted they would land.

One of the containers which contained refrigerators appeared to have been broken open.

“Unified Command has provided this information to the ship’s owner who has hired a contractor to recover the containers that went overboard,” the Coast Guard said.

The Member of Parliament for Courtenay-Alberni says more needs to be done.

“They end up breaking apart. Their contents get spilled all over the coast and spread and of course the styrofoam and the metal from those containers also spreads and it has a huge impact on our ecology,” said Gord Johns.

Johns says in 2016 when the Korean cargo ship Hanjin-Seattle lost 35 shipping containers coastal communities were left to deal with the fallout.

“Right now the program is the government relies on the company to find a contractor to clean it up. That’s not satisfactory,” said Johns.

Johns says the government should be using all it’s resources right now.

The Coast Guard says the containers that washed ashore are not considered dangerous, and planning for a recovery operation on the remote and rugged coastline is underway.

Jerika McCarter, an educator working in Port Hardy, posted pictures of what is believed to be some of the debris from the ship’s containers on Palmerston Beach, south of Cape Scott.

The head of the Nuu-chah-nulth Tribal Council which represents first nations with lands covering 30 percent of Vancouver Island’s west coast says the lack of communication has been troubling.

“This is just unacceptable. They should be in their due diligence have contacts for every single Nuu-chah-nulth Nation and they should know who to be contacting, which territory. That should be just a given and we need to solidify that for any advance notice. Our fishermen could’ve been out and ran into a container in those terrible seas,” said Judith Sayers, the NTC’s President.

On Wednesday, officials confirmed that 109 containers fell off MV Zim Kingston when it encountered rough seas near Bamfield last Friday, far more than the 40 or so containers initially believed to be lost.

The 13-year-old Malta-flagged cargo vessel was on its way to Vancouver from South Korea when the incident happened.

Although many of Zim’s lost containers continue to drift along the west coast of northern Vancouver Island — including Cape Scott Provincial Park — some of them are likely now at the bottom of the sea.

“We expect that at least some of them have sunk. They’re out there being battered in heavy seas,” said Mariah McCooey, deputy federal incident commander. “The watertight integrity is not that great. So there’s, there’s a good chance that a lot of them have already sunk.”

#CCGLive: The Atlantic Raven continues to support operations at the #ZimKingston today with emergency tow and firefighting capacity if needed. Firefighters continue to work on the ship and on-shore air quality monitoring continues to show no impacts. pic.twitter.com/rrnhZ2cdrg

There were close to 2,000 containers onboard the Zim Kingston, with a thousand of those being on the upper deck., and at least two containers that went overboard contained the hazardous materials potassium amylxanthate and thiourea dioxide. The contents inside the remaining ones at sea include Christmas decorations, metal car parts, clothing, toys, yoga mats, stand-up paddle boards, and industrial parts, according to officials.

McCooey said a salvage company hired by Danos is working on a plan to retrieve the containers and urged people not to go near them.

Anyone who spots containers is asked to report them to the Coast Guard immediately by calling 1-800-889-8852. 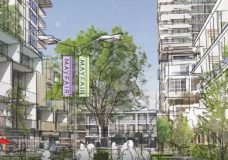 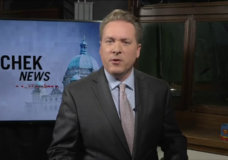