A massive circus tent set up for a “gospel tent revival” on School District 61 property next to Blanshard Street in Victoria is raising eyebrows and prompting concerns.

Kimberly Lowe, who lives in the area, says she grew concerned when she saw the tent was for a gospel revival after hearing about a similar event in Kelowna that left many attendees ill.

“If you’ve ever been in a tent with a large number of people it gets wet, it gets hot, and that’s all recirculated air that people are re-breathing and if you have a lot of people in there and anyone has any kind of respiratory illness, everyone is going to be exposed,” Lowe said.

“I know that faith is really important for people but this may not be the best way to do that safely for everyone,” she said.

Teale Phelps Bondaroff heard about the tent revival from some friends. As the Research Coordinator for the BC Humanist Association, he takes issue with the school district renting its property to this type of religious event.

On the group’s website, there are claims that hundreds of “deaf, dumb, blind, crippled and cancers have been instantly healed” at these events, which are lead by revivalist Len Lindstrom.

“I’m not claiming to heal anybody but I point them to the one that can which is Jesus Christ, and we see marvellous miracles, it baffles the imagination,” Lindstrom told CHEK News.

Lindstrom says organizers are taking COVID precautions. only filling the tent to half of its 600 person capacity to allow distancing, lifting tent flaps to allow air circulation and people can wear masks if they choose.

He says he’s safely held more than 150 events since the pandemic began.

“We have never had one sick person, not one outbreak of COVID, not one that contracted the disease,” he said.

In a statement, SD61 says the organizers have met all requirements of their rental agreement, including providing a communicable disease plan.

Those like Lowe and Phelps Bondaroff that are raising concerns about the week-long gospel event say maybe it’s time the District takes a second look at exactly how those agreements are approved.

“I think this is a golden opportunity for SD61 to revisit their rental agreements,” Phelps Bondaroff said. 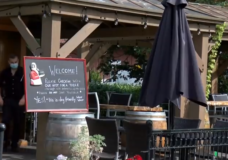 Vaccine passport prompts restaurants and bars to beef up security 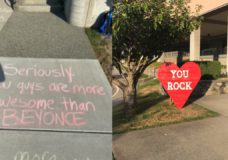