WATCH: Judith Conway’s 30-year-old son died in November 2017 after taking a lethal dose of fentanyl. Since then she has created a flag memorial on her backyard fence with the names of a hundred people who have died from overdoses, most of them from the Comox Valley. She took those flags to the Vatican to be blessed by the Pope.

It’s a long way to the Vatican from Comox but a meeting with Pope Francis March 20th is a moment Judith Conway will never forget.

“He had seen me and I was crying. It was very emotional for me and he came right over and just blessed me and held my hand and he was just a gentle soul,” said Conway.

But her reason for seeing Pope Francis is one of personal tragedy, that began when her son died of a fentanyl overdose November 5, 2017.

Thirty-year-old Matthew Conway had a normal upbringing but things changed after an accident nine years ago that resulted in him taking prescription pain killers. He also had a problem with alcoholism that eventually turned into a downward spiral with cocaine. He had been in and out of rehab twice.

Following his death, Judith Conway felt that she had to do something to create awareness about drug overdoses.

She created a memorial on her backyard fence facing a street behind her house with flags containing names of people who have died from drug overdoses, most of them from the Comox Valley.

There is also a string with almost 4000 pieces of yarn representing each overdose death in Canada in 2017.

His family was shattered by his death, but his mom wasn’t going to let him die in vain, first starting the memorial then writing a letter to the Vatican asking the Pople to bless the flags and ribbons of yarn.

She was invited to attend in March.

She and her husband were led to a V.I.P. area very close to where the Pope addresses thousands of people in St. Peter’s Square.

“He blessed and prayed over the flags and ribbons and it was very emotional so I can’t remember too much,” added Conway.

She says Pope Francis spoke to her for about two minutes in a language she didn’t understand but she’s certain he did understand how important it was for her to be there. 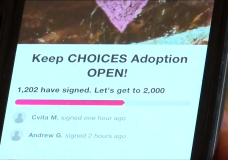 'We're not gonna just lay down and die': Last-minute move might save Vancouver Island's only adoption agency