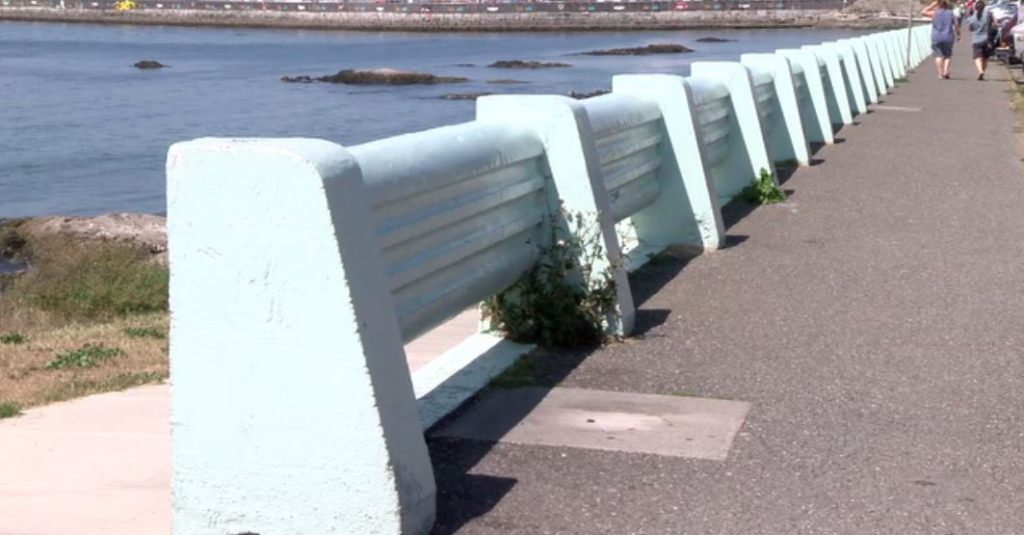 City of Victoria staff are recommending replacing the concrete railing along Dallas Road.
CHEK News
The Dallas Road concrete railing could be replaced with a new steel and wire cable design if Victoria council approves a recommendation from city staff. City of Victoria staff are recommending council endorse the replacement of the existing balustrade along the Dallas Road seawall with a steel stanchion and wire cable design, similar to other waterfront railings in the city. The report says the current railing is beyond the end of its useful service life so staff are recommending the full replacement to reduce maintenance and replacement costs and improve aesthetics. “This steel stanchion and wire cable design is consistent with the treatments along Ogden Point Breakwater and other pathways along the city’s waterfront,” the report says. Staff is also recommending that the council approve amending the 2019 Financial Plan by adding $150,000 in project funding to allow for “detailed design and contract preparation for the replacement balustrade,” funded from the Buildings and Infrastructure Reserve. 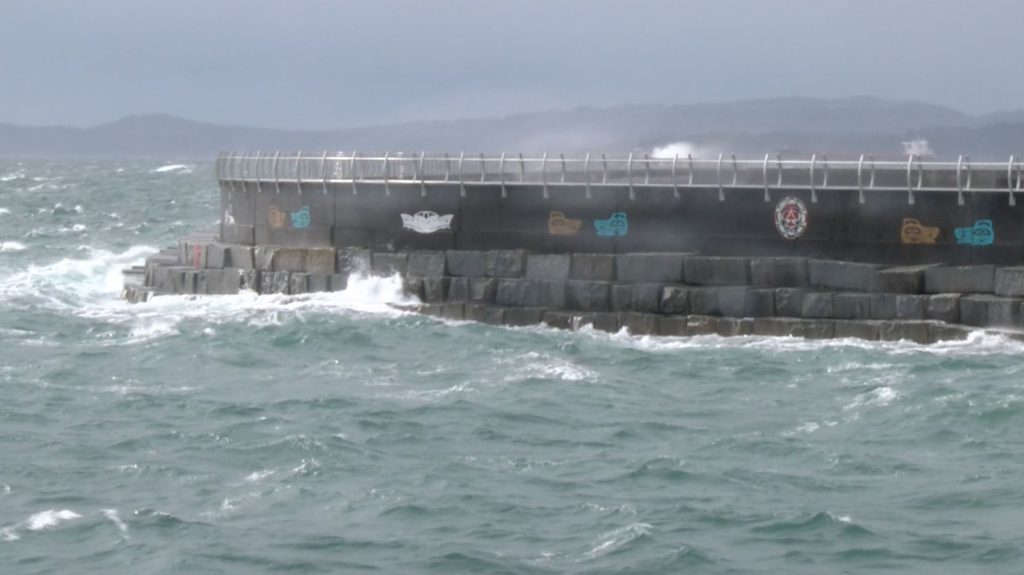 City staff are recommending a steel and wire railing to replace the concrete balustrade on Dallas Road. File photo.

According to the report on the balustrade replacement, city staff had originally planned for the current concrete railing to be replaced at the same time the final stages of a Dallas Road portion of Capital Regional District (CRD) Wastewater Treatment Project was being completed in mid-2020. That part of the project includes new sewer infrastructure along Dallas Road, along with a new cycle path, sidewalk, curb and parking between Dock Street and Lewis Street. These areas are now expected to be finished in fall 2019. In the report, city staff says they now have an opportunity to accelerate the replacement so there would be no need for construction in 2020. “The most recent CRD project schedule estimates suggest that a rapid design/planning process can be integrated into the Dallas Road works, in order to streamline the balustrade replacement in 2019,” the report says. “The accelerated program would require a reduced project design and contract timeline, which could be accomplished by using a proven railing design and by using project planning resources already in place with the CRD teams.” The report says while detailed cost estimates are being developed, the replacement (including removal, fabrication and installation) is estimated at over $1 million, not including contingencies. Staff will be comparing costs to recent railing installations, including the Johnson Street Bridge and Reeson Park, according to the report. “The design, replacement and installation of the new railing will represent a significant cost given the scope and complexity of the project. In addition, lead paint must be carefully managed when
removing and disposing of the existing balustrade and could represent an additional significant project cost which detailed design and planning will establish,” the report says. According to the City of Victoria, archives indicate the current concrete railing along the concrete sea wall on Dallas Road, between the Ogden Point breakwater and Lewis Street, has been replaced a number of times, with the latest structure going up nearly 70 years ago. The wall is not on the city’s heritage register or part of any heritage inventory or formally identified as significant. “The balustrade acts as a safety system for pedestrians and is believed to have been originally designed to withstand impact from a moving vehicle. The new design and configuration of this
Dallas Road segment includes a separated vehicle and bike travel lanes, angled parking, bollards and sidewalk grade differential. The new railing will be located more than 8m away from moving vehicle lanes. The greatest likelihood for a vehicle striking the railing is for a driver making an error while parking, which would be contained by the bollard at the end of the parking stall. In this light, a more modern, pedestrian focussed, less obtrusive, and more visually appealing design is appropriate for the new configuration of Dallas Road,” the report says. City staff did look at other options, which were listed in the report. One option is retaining the existing concrete structure with repairs and replacement would increase the life of the structure by approximately 10 to 15 years but the report says ” only so much could be done at significant cost to extend the life of the structure and complete replacement will eventually be required.” Another option would provide an approximate replica of the existing structure and would include the complete removal and replacement of the existing concrete structure. According to the report, a previous engineering consultant estimates this replacement would cost approximately one-and-half times more than the steel replacement staff are recommending. And yet another option is to maintain the current structure. City staff says this is the least expensive short-term option but ongoing maintenance costs will continue to go up. A couple of pedestrians along Dallas Road shared their thoughts on the replacement anonymously on Monday. “No, this does not need to be replaced, I think what we need to do is really honour our heritage and I think this particular barrier is iconic and should be supported, not replaced,” one man said. “I think it’s a great idea to replace the railing with the same kind of railing that’s on the breakwater. It would help with the visuals,” one woman said. The city has recently completed a four-year restoration program on the vertical seawall along the section of Dallas Road, including repairs, a new structural facing to the entire wall and upgrades to the adjacent stairs and pathway. The recommendation will go before the committee of the whole and council on Aug. 8. Read the full report below: 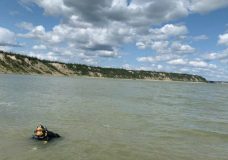