The dull plastic thud of pickleball is a sound causing contention in the Capital Region.

“It exploded in neighborhoods just like Todd Park here…and this is a place I played with a friend who lives just down the street,” says Victoria Regional Pickleball Association director Connie McCann.

“All during the pandemic we played and we played in this court, we played all over the city.”

The noise complaints have also increased. Effective Apr. 1 the City of Victoria will ban pickleball at Todd Park because the courts are only 17 metres from the nearest homes. It’s a decision that surprised players in James Bay.

“We had no idea that we were causing anybody any harm,” says Paul Fitzgerald.

“This came out of the blue a few weeks ago, now we’ll have to travel and perhaps drive which we were hoping not to do. It was nice that we didn’t have to get in our cars and go anywhere.”

While the fate of pickleball at Todd Park might now be sealed, McCann and the association had hoped for more dialogue with the city about the issue.

“I’d like to see at least a sit down,” says McCann. “I don’t know what would be decided at the end of the day, but if we all sit down and talk then maybe we could find some solutions.”

The City of Victoria plans to introduce dedicated pickleball courts to Topaz Park in their next phase of improvements, but according to McCann that project is still two years away from completion.

Until then the pickleball players will have to head to Central Park to play. 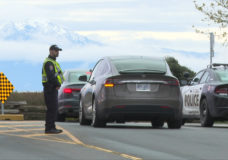 'The cost is significant': Police checkpoints will remain as needed, as convoy is a no-show again