Chelsea Smith is keeping her distance while helping bring families together.

“We’ve definitely been seeing a lot of smiles and a lot of beautiful families around the city,” Smith said.

Like many workers around the world, the full-time boudoir photographer has had to put her professional life on hold. But Smith has discovered a creative way to fill time and spread joy.

“I joined the Front Steps Project. A photographer in the States had started it and I found it on Facebook and decided to start it in Victoria,” Smith said.

In less than a week, Smith has captured over 40 families from all around the greater Victoria area.

“Just asking families to come out on their front porch so that we can take a portrait for them to remember this weird time we’re in,” Smith said.

The O’Farrel family from View Royal jumped at the chance to capture a piece of dark history through a positive lens.

And over in Langford, the Cabrera family couldn’t resist.

The porch portraits have added light to a dark time. Despite the high demand, Smith isn’t in it for the profits.

“This is 100 per cent complimentary. I just ask that if somebody is willing to donate that you would donate to the 1up Single Parent Resource Centre in Victoria. I think we’ve raised just over $400 so far.”

Smith says she is currently putting the project on hold due to an issue with her vehicle. However, once fixed, she hopes to be back behind the lens bringing joy to families all over Victoria. 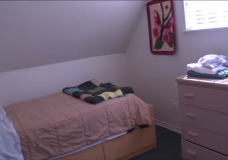 'Calm before the storm': Vulnerable women services prepare for more clients during COVID-19
Tentative contract reached between B.C. and its 45,000 teachers