Friends describe former University of Victoria Vikes Soccer captain Mackenzie Rigg as a leader on and off the field.

He’s an elite athlete with a radiant smile and thirst for adventure, but this past summer Rigg’s life roadmap took a major detour.

“Started to get these headaches, and I had migraines in the past but they were kind of just the next level,” said Rigg via Zoom from his temporary home in Vancouver.

After several visits to the hospital, doctors eventually performed a CT scan on Rigg which revealed a brain tumour.

“The growth was about the size between a ping pong ball and a small orange,” said Rigg, who was officially diagnosed with stage four brain cancer in August. It was news that shocked and saddened the close-knit Vikes sports community.

“Mackenzie’s my boyfriend, so it hits a bit close to home for me for sure,” said Trinity Kettyls, Rigg’s girlfriend and member of the Vikes Women’s team soccer team. “Hearing that diagnosis was definitely challenging, it flipped our world upside down.”

“Very unexpected, it was very tough to hear,” added Fougner-Rukus, who lost his father to cancer a few years ago.

Rigg, an aspiring lawyer who was supposed to be entering first-year law school at UVIC, just wrapped up his final radiation session in Vancouver and now plays the waiting game for results. He’s physically weaker than he used to be but remains full of hope.

“So I think really the only thing I can control is my approach to it,” said Rigg. “This didn’t stem from being a lifelong smoker or being unhealthy, living an unhealthy lifestyle. It was just pure freak chance.”

“Mackenzie’s been the strongest one out of all of us through this. He’s really determined to fight it,” added Kettyls.

As a way to honour Rigg’s fight, those closest to him have launched a fundraiser in support of brain tumour research.

“We are running two hundred and seventy kilometres over the course of three days to represent the twenty-seven Canadians diagnosed with brain tumours every day,” said Kettyls, determined to find a silver lining in the tragic diagnosis.

So far, the Vikes Kick Cancer campaign in support of Mackenzie has raised over $40,000 for the Brain Tumor Foundation of Canada. And though he has every reason to dwell on his unfair misfortune, Rigg’s can’t help but smile and feel humbled with the positive response from friends, family and the Vikes and soccer communities around the province.

“In a lot of ways, I’m feeling pretty lucky right now to have the people around me that I do and the support that I have. It’s just been incredible.”

The Vikes Kick Cancer campaign has a fundraising goal of $50,000. Click here if you’d like to donate. 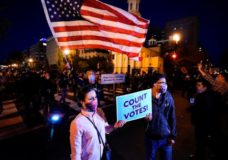