Posted: Nov. 30, 2020 7:13PM
CHEK
WatchJoe Robertson and Jack Amos have spent the past few weeks running from Port Hardy to Mile Zero to raise money for single parents in need.

Joe Robertson and Jack Amos capped off their epic journey at Mile Zero, stopping for socially distanced photos with family and soaking in the moment.

“It was a long two weeks, really really hard and it feels great to get here,” says Robertson. “It’s been a really stressful journey full of curve balls kind of thrown at us left right and centre,” adds Amos.

The money raised from Robertson and Amos’ run will go to the 1Up Single Parents Resource Centre, an organization that provides financial and emotional support to single parents. It’s a cause close to both Joe and Jack’s hearts.

“From about when I was two to 10 my mum was a single parent and I just saw how hard she worked,” says Robertson.

“My parents split when I was around 11,” says Amos. “I said it before and I’ll say it again, it’s just about one of the hardest things a human being could do both just mentally, physically, emotionally,” adds Amos.

Today marked the culmination of their Vancouver Island trek, overcoming van breakdowns, a fender bender and personal injury to shatter their fundraising goal of $10,000.

“Honestly I’m just really happy for all the people that are going to benefit from the funds raised for 1Up,” says Amos.

“Only a few weeks ago these guys pulled it together so quickly,” adds 1Up executive director Sarah Downey. “These guys raised $8,000 when they were like four or five days into their run, we were completely blown away.”

Through all of the long days, knowing that they were making a difference made the weeks on the road all worthwhile.

“That’s kind of what kept me going through it, it’s not about us it’s about those people so it feels really really good,” says Amos.

While the run might have ended, Joe and Jack are still collecting donations. To contribute visit their GoFundMe page. 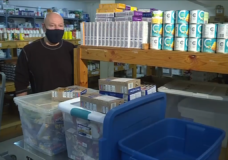 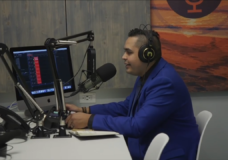