CHEK Upside: Howard the Gnome gets his own book

It’s a children’s book about a gnome with no home.

“I moved around a lot as a child so when I found out about Howard moving immediately I thought back when I was 12 moving from Ontario,” says Nanaimo children’s author Lindsay Ford.

Howard the Gnome, a 7.91-metre tall statue that was built in 1998 and recognized by the Guinness Book of World Records as the world’s largest garden gnome, used to call Nanoose Bay home until last year when he was relocated to Saanich.

Ron Hale built the gnome for his family’s amusement park which was fittingly called Gnome Man’s Land. The amusement park was eventually torn down and replaced with a gas station after the family sold the property but Howard remained in place.

But last year, Howard’s survival was threatened when the current owners of the property announced they would tear him down, citing disrepair, if he couldn’t find a new home. The announcement sparked a flurry of interest from the property owners around Vancouver Island and eventually Howard found a new home at the Galey Farms in Saanich.

So the Nanaimo-based author decided to tell the story of the world’s largest gnome’s move and answer questions from kids wondering where the former Nanoose Bay resident went by creating Howard, a children’s book that deals with moving and is set to be released Oct. 13.

“Will he miss his friends, will he make new ones? I’ve been the new kid, how does Howard manage moving?” says Ford. “So that was a big inspiration for the story.”

Of course, telling his story meant reaching out to Galey Farms and Howard’s original owners.

“I wanted to reach out to the original family to make sure that my idea was supported and they were receptive and also Rob Galey of Galey Farms was super receptive that I was putting a story together,” says Ford.

While Howard is the main focus of the book, it’s about more than just the gnome.

“I get to share a story and have kids relate to the story of Howard as well with their own moving,” says Ford. “I mean seeing as the times are odd and weird, getting used to changing times is really important so delivering that message to kids and people, in general, is kind of the inspiration for creating the book,” Ford adds.

So will Howard’s book be available at his new residence?

“I hope so, I mean I’ve reached out to him, he’s aware of the book but now that we’ve got a copy here and more copies to come, I’d love to see some at Galey Farms where Howard is,” says Ford.

RELATED: Offers pour in from across Vancouver Island to give ‘Howard’ the gnome a new home 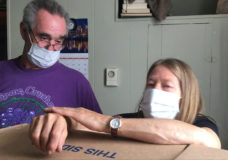