March 31, 2021 updated
CHEK News
One of Canada's largest banks is proposing major overhauls to the real estate sector to prevent prices from spiralling even higher.

One of Canada’a largest banks is proposing major reforms to the country’s red-hot real estate sector, including a capital gains tax on homes it says could immediately cool speculation in the market.

The Bank of Montreal (BMO) published a new report this week that called on provincial and national politicians to decisively intervene to prevent the price of housing from continuing to skyrocket.

“We believe policymakers need to act immediately, in some form, to address the home price situation before the market is left exposed to more severe consequences down the road,” read the report, authored by economists Robert Kavcic and Benjamin Reitzes.

“As it stands now, prices are going parabolic across a number of markets, and the price strength appears to be feeding on itself.”

The median price of a single-family home in Greater Victoria was up more than nine per cent in February compared to the year before, and the average price now sits at almost $1.2 million. Prices have risen sharply during the pandemic across the country, including in small towns and cities, widening an inequality problem already exacerbated by the crisis.

The BMO report cites a “market psychology” in which people expect housing prices to continue to rise indefinitely, heightening speculation and a fear of missing out by those struggling to enter the market.

The economists propose a “speculation tax” that would function as a capital gains tax if a person tries to sell their primary residence within five years of purchasing it. The tax would not be retroactive, and only apply to future sales. The authors cite a similar concept used in Ontario in the 1970s that they say “weakened the market overnight.”

Canada currently exempts primary residences from capital gains taxes entirely. However, additional real estate a person owns is subject to a capital gains tax – usually at a person’s income tax rate on 50 per cent of the profit of the transaction. The report proposes adding a second speculation tax surcharge onto non-principal residences.

B.C. already has a “speculation and vacancy tax” but it does not actually tax speculative profit on home sales and instead focuses entirely on adding a surcharge to properties left vacant.

The single largest measure that could affect the market would be if the Bank of Canada raised interest rates, or at least signalled it would not hold rates at zero until 2023 like it has currently promised, read the report. The cheap cost of borrowing has added fuel to the market.

“Interest rates and the Bank of Canada’s commitment to keep them low for years are arguably the key drivers behind the meteoric surge in home sales and prices across large swathes of the country,” according to the report.

“A move here would have an immediate, clear and notable impact to cool housing.”

Another notable proposal by the authors is opening up the real estate bidding process to prevent runaway blind bidding competitions that drive up prices – and by extension the value of neighbouring homes — artificially.

“This could use open bidding among agents and/or standardized escalation clauses for the price component of offers,” read the report.

“This would keep the sale price from settling well above the price of the next willing buyer, and keeps the comparable more appropriate for the next property to list in that location. While this won’t cool the market on its own, it would limit the ballooning that we’re now seeing in a very tight market.”

Some sales of single-family homes in Greater Victoria are going up to $400,000 over asking, as part of a bid process distorted by so-called “bully bids,” artificially low listing prices designed to spark bidding wars and other factors, real estate agents recently told CHEK News. As a consequence, buyers are having to waive critical steps like home inspections as part of the bidding wars.

The B.C. government said BMO’s recommendations are outside of its jurisdiction.

“In the BMO report, the majority of the potential measures are the responsibility of the federal government, including a possible capital gains tax on residential real estate,” the Ministry of Finance said in a statement Wednesday. The government said it is “closely monitoring” the province’s real estate sector and “will continue to use tools at our disposal.”

B.C. real estate agents representing the seller of a property are not required to disclose information to buyers about competing bids, but are required to “act in the best interests of their client” and follow the law, the ministry said.

The BMO report also lists other ideas for market intervention, including increasing supply — defined as a very complex solution given building and permitting delays — as well as tightening mortgage rules, limiting people to only being able to borrow 65 per cent of the value of their home instead of the current 80 per cent, and mirroring B.C.’s foreign buyer’s tax in other parts of the country. 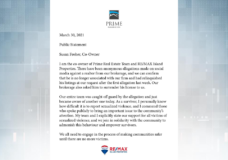 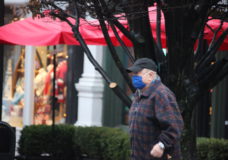