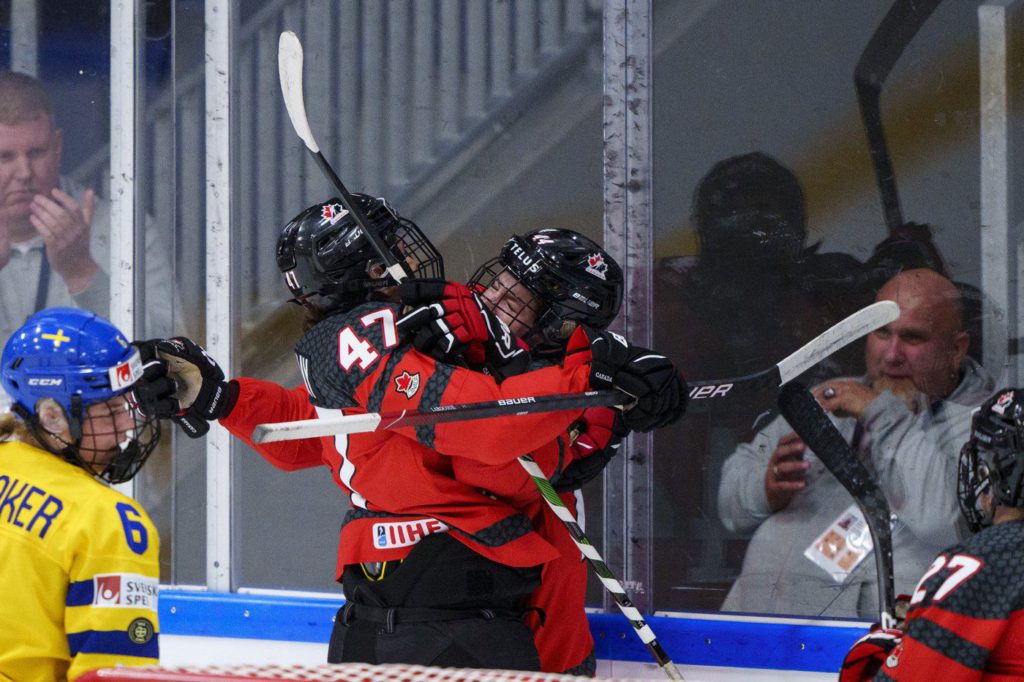 CHEK
Canada players celebrate Sarah Potomak's goal during the women's world hockey championship quarterfinal between Canada and Sweden in Herning, Denmark, Thursday, Sept. 1, 2022. Potomak had a goal and an assist to lead Canada to a 3-0 win over Sweden on Thursday. THE CANADIAN PRESS/AP-Ritzau Scanpix, Bo Amstrup

Canada outlasted a tenacious goaltender to take another step toward defending its women’s world hockey title.

Emma Soderberg, who tends the University of Minnesota-Duluth Bulldogs’ net, was a workhorse in Sweden’s net with 54 saves.

“It was a test of our patience, but also a test of our discipline,” Canadian assistant captain Blayre Turnbull said. “It’s really easy in games like that to become very individual and try to solve the problem by yourself and stray away from our team systems.

“I’m really proud of our group that we stuck to our game plan despite not having the offensive success that we wanted to have.”

Canada meets beleaguered Switzerland in a semifinal Saturday with the victor advancing to Sunday’s gold-medal game in Herning, Denmark.

Minus captain Lara Stalder and top scorer Alina Mueller because of COVID-19, as well as two other injured players, the Swiss eked a 2-1 shootout win out over Japan in their quarterfinal.

Czechia, coached by former Canadian defender Carla MacLeod, posted the upset of the tournament so far and reached the semifinals for the first time with a 2-1 overtime win over Finland.

The U.S. had an easier time in their 12-1 quarterfinal win over Hungary to face the Czechs on Saturday.

Canada and Sweden met in a world championship game for the first time since 2009, although the Canadians beat the Swedes 11-0 in an Olympic quarterfinal in February.

Soderberg gave up nine goals over two periods in Beijing before she was pulled, but she gobbled up the puck Thursday.

“I think we came out a lot stronger. I feel like I came out better than I did in Beijing too,” Soderberg said. “We didn’t let them do whatever they wanted.

“I was able to stay a lot calmer. I think I wanted to do a little bit too much in the Canada game in Beijing. That kind of punished me and us.”

Sweden, the 2006 Olympic silver medallist, was relegated in the 2019 world championship.

The national team then boycotted international competition in protest over compensation and other competitive issues. The dispute with Sweden’s federation was resolved later that year.

The COVID-19 pandemic eliminated second-tier world championships for Sweden to gain promotion, but the world No. 8 replaced Russia in this year’s 10-country tournament.

The International Ice Hockey Federation has barred Russia from tournaments because of that country’s invasion of Ukraine.

“We got here under bad circumstances of course, but we hadn’t had the opportunity to qualify for the top-tier world yet,” Soderberg said.

“This is where we want to be. This is where our program should be. How we’re playing in this tournament is a big step forward.”

Canada generated sustained pressure in Sweden’s end for long stretches of the first and second periods, but Soderberg helped limit the Canadians to a 2-0 lead after 40 minutes.

“She a phenomenal goalie. She moves really well,” Larocque said. “She made some huge saves. It was a test for us to stick to the game plan and do the little things right. I think it’s good. We had to play some really good hockey and keep pressure on them.

“We’ll be able to take a lot from, I’d say, the second half of the that game moving to the semis.”

Canadian head coach Troy Ryan continued his line juggling from the previous day’s practice, most notably shifting Victoria Bach into a trio alongside Marie-Philip Poulin and Brianne Jenner, and Sarah Nurse getting ice time with Sarah Fillier and Emily Clark.

“I don’t think there are any natural fits,” Ryan observed. “It’s not like we loved any of the changes. We told them when we made those changes that we’ll keep changing and trying to find something that fits, until there’s no more games to be honest.”

Ambrose threaded a shot from the point over Soderberg’s shoulder at 13:10 of the third period.

Three power-play chances in the first 10 minutes of the second didn’t yield a goal for Canada, which went 0-for-8 overall, but Potomak scored with a highlight-reel even-strength effort.

She scraped the puck off the neutral-zone boards, and then sliced by Swedish defender Maja Persson Nylen going backhand to forehand to solve Soderberg at 13:56 of the second period.

“It was a beautiful goal and that’s something we’ve all seen from her before,” Turnbull said. “It was great for her to get on the scoreboard that way and it was very timely.”

Outshot 14-1 in the first period, the Swedes held Canada scoreless until 17:11 when Renata Fast, below the goal-line, fed Larocque out front for a successful wrist shot top shelf. 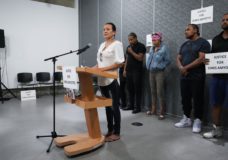 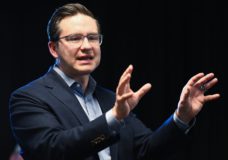