It appears that a handful of people in Campbell River were not physical distancing themselves at a 7-Eleven parking lot early this morning.

Campbell River RCMP say officers responded to a fight involving “approximately 13 people” at the 7-Eleven parking lot on Dogwood Street at around 2:10 a.m. on April 26.

The fight involved a group of adults and a group of youths, who had apparently been partying in separate places, and ended up at the 7-Eleven parking lot at the same time, according to police.

That’s when, for reasons that remain unclear to police, a fight broke out between the two groups.

A number of individuals involved in the fight were underage and there was “clearly” alcohol involved, according to police.

“The cause of the altercation is under investigation. But what was really clear, was that if people had been following social distancing protocols, the event simply wouldn’t have happened,” Const. Maury Tyre, media relations officer with the Campbell River RCMP said in a press release.

Tyre said the fact that people “saw fit to disobey social distancing protocols” and party together is an issue.

“I recognize it’s difficult and a little lonely during COVID times,” said Tyre in the release, adding. “But going out to hang with your besties or drinking buddies is totally contrary to what we as a community are being asked to do. Especially when people travel together in confined spaces.”

Another issue, is that the incident happened after 2 a.m.

“Typically people don’t need to be out after 2 a.m. and usually nothing positive occurs after 2 a.m.,” said Tyre.

The “only upside police” say they found was that both groups “seemed to have” designated drivers.

“However, in one car were members from four different households who will now be sharing germs with their respective homes,” added Tyre. 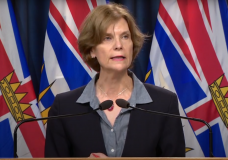