Posted: Jan. 21, 2021 6:54PM
File Photo
A shipwreck from 1968 began leaking oil in Zuciarte Channel last September. Damage to the nearby shoreline and animals said to be minimal.

Video shot earlier this week shows a sheen of oil on the water near Bligh Island west of Gold River, as upwelling from an old shipwreck continues.

“We get little burps that we think are aligning with weather systems,” said Jeff Brady, Federal Incident Commander with the Canadian Coast Guard. “It’s really a consistent upwelling.”

Several agencies and local First Nations are involved, with 30 people working on-site and another 30 working remotely across the country – from Victoria to Ottawa.

Over 3000 metres of containment boom has now been deployed and crews are managing to keep the upwelling oil contained in a fairly small area while removing oil from the surface.

“We’re catching nearly all the oil that’s upwelling,” said Brady. “As you can see in the pictures from our overflight information, with over 10,000 feet of containment boom and that heavy offshore boom that’s over 2 metres tall it’s doing a pretty darned good job of containing that oil.”

The M/V Schiedyk was a 483-foot cargo ship taking a load of wood pulp and bulk barley from Gold River to Portland on January 3, 1968.

However, not far from Gold River, it hit a submerged edge on the south side of Bligh Island and sank.

The first signs of oil from the freighter were reported back in September.

“There’s a lot of labour involved in manually recovering this product that’s mixing with some of the floating organic debris out there such as pine needles and branches” added Brady. “It mixes with those and then we have to manually, with pitchforks and shovels put it into yellow hazardous material bags and then dispose of it properly so this is done every day out at the site if the weather is good.”

Brady says only a minor amount of oil has made it to the shore closest to the site of the shipwreck, adding there has still been no major impact on wildlife.

The next step is a more detailed technical inspection of the wreck using a large ROV (Remotely Operated Vehicle) to determine how much oil is still on board.

A decision will then be made whether the oil can be drained or if the holes will be plugged. 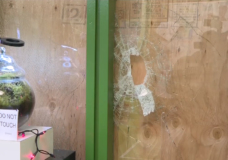 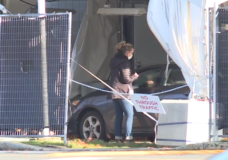