Posted: Mar. 9, 2020 6:01PM | Last Updated: Mar. 9, 2020 6:08PM
CHEK
Watch The arrival of spring on Vancouver Island brings the waking of thousands of black bears in our communities. Due to the mild climate on our coast, bears here semi-hibernate in a sleepy, groggy state called torpor, and as Skye Ryan reports at this time of year, they are emerging hungrier than ever.

Black bears are waking up hungry from torpor or semi-hibernation on Vancouver Island.

The bears are looking for food after a winter of extended napping and very little feeding burned through their fat reserves.

“At this time of year, the weather starts warming up they’re gonna get up and start going about their business,” said Derek Downes of the North Island Wildlife Recovery Centre.

“Looking for food just like these guys are right now,” he said while feeding two black bears

The bears he was feeding, named Rae and Knut, are unreleasable bears at the North Island Wildlife Recovery Centre due to their injuries.

While enjoying berries by the handful, they gave us a glimpse of the appetites waking up in the estimated 8,000 black bears on Vancouver Island alone.

“Right now the bears are looking for any calories they can get,” said Downes.

“And the easiest way for them to get calories from garbage if it’s available.”

Residents are being urged to keep garbage inside, until right before it is picked up, to ensure bears aren’t drawn into communities when their appetites are at their highest.

“Garbage is the number one thing that we can do to prevent bears from becoming problem bears,” said Downes.

“So keeping your garbage secured, keeping it inside until it’s gonna be picked up.”

Trish and John Young just moved to Errington, just outside Parksville, from the Lower Mainland.

Their new Errington neighbours were quick to share tips on how to keep bears at bay.

“People actually freeze their compostables so they don’t have to have it out in their driveway or out in their yards,” said Trish.

And while Knut and Rae will remain at the centre, four orphaned cubs are being back nursed to health to be released this coming summer. 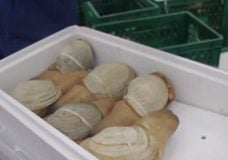 B.C. geoduck industry to lose millions due to coronavirus 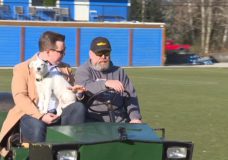 Poop hero cleans up and turns heads in the CRD