THE CANADIAN PRESS/Jonathan Hayward
A black bear is seen near Lake Louise, Alberta, June, 2020. A black bear is dead and two women are critically hurt after an attack near Dawson Creek, B.C.

A black bear is dead and two women are critically hurt after a family of four was attacked while hiking near Dawson Creek in northeastern B.C.

A statement posted to social media by the B.C. Conservation Officer Service says the family turned and ran when the bear charged them Monday evening.

The service says the bear chased them and attacked one woman, while another woman and a teenage boy were injured trying to help her.

The RCMP say they searched for about an hour after getting a call for help at the cross-country ski club trails on Bear Mountain, south of Dawson Creek.

Officers found the two women, aged 30 and 48, critically hurt by a large boar black bear apparently “guarding” the victims and ignoring attempts to scare it off.

The Mounties say officers shot and killed the animal, making way for the victims to be airlifted to hospital with life-threatening injuries.

The conservation service says one woman was airlifted to hospital in Edmonton, and her condition is unknown.

The two other victims were taken to hospital in Dawson Creek.

The service says its investigators remain at the attack site.

“No additional bears were located during a sweep of the area. A necropsy will be conducted on the bear, an adult male.” 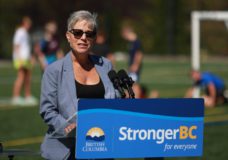 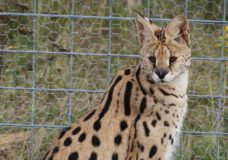 'Quite afraid': Exotic cats on the loose near Qualicum Beach have locals on edge