WATCH: The Belfry’s ‘Bed & Breakfast’ highlights the struggles of homeowners trying to buy into a red hot housing market. Ceilidh Millar has your community story.

What: Bed and Breakfast

The Belfry Theatre’s summer production, Bed and Breakfast, highlights the struggles many homeowners in Canada face when trying to purchase a home.

The two-person comedy follows a gay couple, Drew and Brett, trying to find a house in an urban community.

The story reveals they end up creating a home while fostering a community in a rural town.

“Instead of staying in Toronto and fighting the real estate war they’re going to move to this small town,” said playwright and actor Mark Crawford. “We decide to renovate this big house and open a bed and breakfast.”

“This has been going on for years in cities like Toronto, Vancouver and Victoria,” explained Crawford. “The [characters] are certainly not rich by any means but they have jobs, they have careers, they have lives and they just can’t make the next step up.”

The two actors don’t use props or change costumes during the show, but they effortlessly bring to life dozens of characters using their voice and movement.

“The actors actually play about 10 other characters each,” said play director Ashlie Corcoran. “It’s the actual community that they’re meeting.”

“Part of the joy for the audience seeing this show is not only following the story,” explained actor Paul Dunn, who plays Drew in the show. “They’re watching us transform over and over again as different people.”

Adding to the authenticity of the main characters is Crawford and Dunn’s off-stage relationship.

They are not only colleagues but real-life partners as well.

“It’s pretty great actually” said Dunn when asked what it’s like working together.

As the story unfolds, Brett and Drew discover their true home lies in their community.

“At first they’re thinking about their home as literally walls, floors and a roof,” said Corcoran. “What they learn throughout the play is that a home is more about your community.”

Check in to the Belfrey Theatre’s Bed and Breakfast on now until August 27. 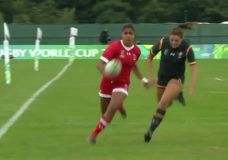 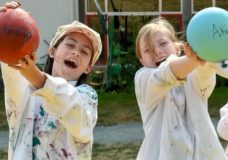