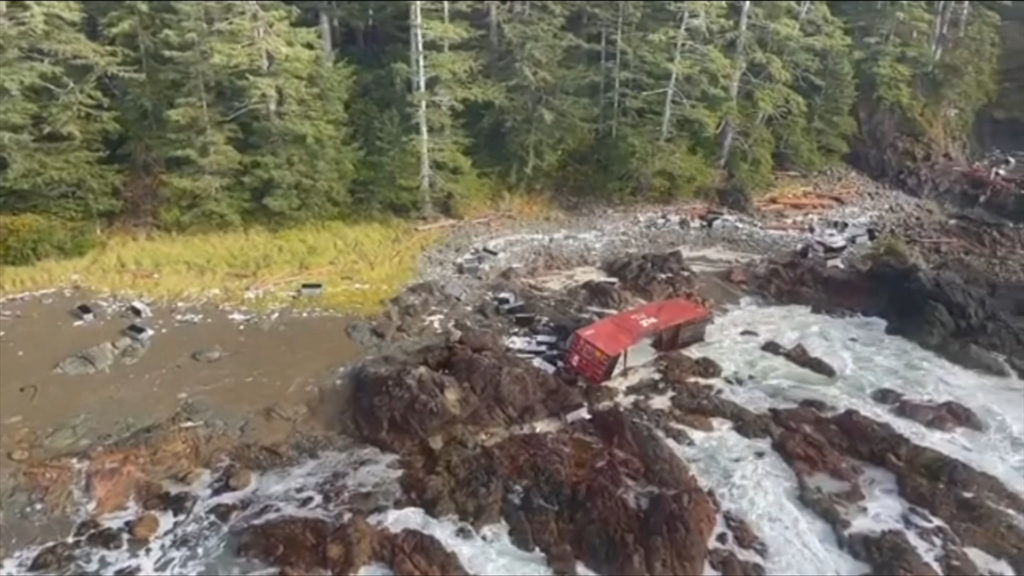 Beach clean-up efforts are underway to remove the debris from 109 shipping containers that were knocked off a cargo ship in rough seas off the coast of Vancouver Island on Oct. 22.

Hazardous chemicals are in at least two of the adrift containers that have not been located. Other contents, including Christmas decorations, sofas, poker boards, metal car parts, clothing, toys, yoga mats, stand-up paddleboards, as well as industrial parts, are starting to wash up on beaches along the northern coast of Vancouver Island.

On Oct. 29, four containers and debris were found on a beach at Cape Palmerston.

Contractors hired by the owner of MV Zim Kingston began to organize and remove debris from the containers on the beach over the weekend.

“By Sunday afternoon, a total of 71 refrigerators, 81 bags of Styrofoam, 19 bags of garbage, and 11 helicopter bags of garbage were flown off of Cape Palmerston beach and into metal bins in a nearby parking lot,” the coast guard said in a release.

All “large” debris is now off the beach, they added.

As weather permits, another cleanup priority this week will be removing debris from Guise Bay, which the Canadian Coast Guard said in an area reported to be impacted.

Volunteers looking to help with beach clean-up efforts have been asked to wait.

“Let’s leave the Canadian Coast Guard and 1/8the 3/8 ship’s owner to sort out who’s in charge and how it’s all going down,” Living Oceans Society posted on Facebook on Friday, Oct. 29.

Karen Wristen, the society’s executive director, said there are many people with little to no experience of the coastal shores offering to go clean up the debris. And without anyone to supervise or organize volunteer efforts, she said it could complicate matters further.

Ultimately, Quatsino First Nation was contracted for the work and “has been able to provide adequate human resources to get the job done_at least, the job that’s been identified to date,” said Wristen.

The ship’s owner has stepped into its responsibility to deal with the material that was washed ashore in a manner required by international maritime law, she said.

“It remains to be seen whether or not they recognize the vast extent of the debris field,” she added.

Ashley Tapp is the co-founder of Epic Exeo, a non-profit organization based out of Port McNeill. She said that their beach clean-up efforts focus on the areas impacted by the cargo spill, on the north coast.

Tapp said her organization isn’t looking to take jobs away from anybody.

“We’re just volunteers and we just want to help,” she said.

Although fridges and other large items have been recovered from Cape Palmerston beach, she said that Styrofoam has broken into little pieces all over the beach and is entangled in the seaweed.

Living Oceans Society has reports of debris from the container spill that spans Vancouver Island’s north coast, from Cape Scott to Cape Sutil, and beyond.

“Government representatives should have accurate information about the extent of the area impacted and act to ensure that sufficient funds are maintained available to clean it all up before winter storms disperse it even more widely,” said Wristen. “Time is of the essence here — the debris will only become more widespread the longer it is left on beaches.”

As of Nov. 1, Johns said he had yet to hear back from the newly appointed Minister of Fisheries and Oceans Canada, Joyce Murray.

“She’s missing in action,” he said.

The contractors who have been hired by the shipowner for cleanup include New Westminster-based Amix Group and Campbell River-based Pacificus Biological Services.

“This is a complex issue that the government needs to lead,” said Johns. “The government should be dispersing our local technical response team from coastal communities and Indigenous communities, and billing the company.”

Instead, he said, the government places the onus on the company and fines them if they’re not living up to their standards.

And without a “technical response plan for marine debris spills,” Johns said he questions the government’s standards.

“We’ve got governments promoting more and more shipping, and more and more traffic, but they’re failing to protect the existing coastline from the traffic that exists today,” he said.

As issues with cargo ships emerge, Transport Canada said it’s supporting the proposal to conduct a future “Concentrated Inspection Campaign” on cargo stowage and securing, under the Paris and Tokyo Memorandum of Understanding on Port State Control. This would promote maritime safety through the inspection of foreign ships in national ports.

“Canada is a member of the International Maritime Organization (IMO) and participates in the ongoing process of amending the conventions and the related regulations and codes,” said Transport Canada. “Safety of container ships is a global issue that requires co-operation between all parties involved. As such, Canada is working closely and actively with like-minded states to discuss issues related to container ships safety.”

Other than increasing safety standards, Johns argued that the federal government needs to have protocols with First Nations when it comes to communications on an incident like this.

“They’re not following through with that,” Johns stated.

Various First Nations are contributing local knowledge by identifying resources at risk within the environmental unit of response, and the Quatsino First Nation is helping to clean up the shoreline around the Cape Scott area, the coast guard said.

“This helps the response efforts by enabling us to prioritize response efforts to mitigate impacts to the environment,” the coast guard said. “Indigenous leaders are monitoring their territories and reporting on any potential debris or containers that come ashore from the Zim Kingston vessel. They are actively patrolling beaches and participating in coordination calls with the Canadian Coast Guard to share information in a coordinated response.”

Nuu-chah-nulth Tribal Council (NTC) President Judith Sayers said she was never contacted about response efforts and that it took several days before NTC’s emergency coordinator was included in coordination calls.

Sayers said the coast guard should have a formal communication process in place, along with emergency contacts for every First Nation along the coast.

“They shouldn’t be scrambling around trying to figure out which First Nations to get a hold of,” she said. “We need to be included in the decision-making that’s happening with the incident command team.”

Satellite imagery, helicopters and ongoing overflights by Transport Canada’s National Aerial Surveillance Program continue to try and identify marine debris and containers, the coast guard said. As of Nov. 2, only four of the 109 containers have been found to wash up on the shore.

“Plans are underway for the removal of all four containers via helicopter when a weather window permits,” the coast guard added.

With only four containers located, Sayers said, “We need more information on the extent of the efforts to find sunken containers, especially the hazardous material.”

“All the 1/8information 3/8 I’m getting is about the cleanup on the beaches from the ones that have surfaced,” she said. “But there’s many that didn’t and they don’t know where they are.”

This article was written by Melissa Renwick, Local Journalism Initiative Reporter and published via the Canadian Press. 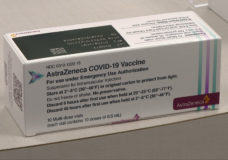 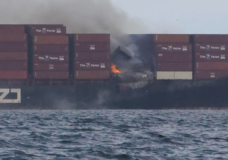