BC Hydro warns swimmers to be careful near its facilities

Posted: Jul. 31, 2020 6:16PM
CHEK
WatchTwo drownings in Buntzen Lake, near Vancouver, in 2018 prompted a study of swimmers and their habits, which found some worrying statistics.

In the summer of 2018, two people drowned at Buntzen Lake near Vancouver, and there was a very close call for another person at Hayward Lake.

Both areas have BC Hydro facilities nearby and as a result, the utility undertook a survey about swimmers, the problems they get into and why.

One of the key findings was overconfidence. Eighty five per cent of the people think of themselves as being experienced swimmers but only go swimming a few times a year.

There are 19 BC Hydro recreation sites in BC, including three on Vancouver Island. They are at the Comox dam, the Strathcona dam and the John Hart dam.

BC Hydro says some of the risky behaviour witnessed has happened at the Comox Lake dam.

“We’ve recently observed people swimming very close to the dam as well as on infrastructure, the log booms in the area that they shouldn’t be,” said Louwers. “It presents a great risk that people shouldn’t be taking.”

Another surprising finding in the survey is that 53 per cent of the swimmers who responded admitted to consuming drugs or alcohol before swimming.

“And again men are 30 per cent more likely to consume those before swimming as well,” added Louwers. “And we know that drugs and alcohol impair judgement, make your reaction time slower.”

BC Hydro wants swimmers, paddlers and boaters to watch for warning signs and to heed them this weekend. 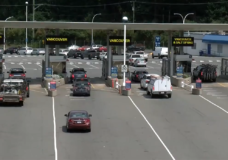 Pandemic triggering increase in abuse against BC Ferries workers 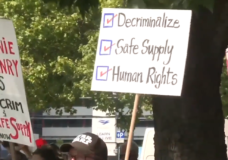 Dozens rally in Victoria for government action on overdose crisis