This Easter weekend is off to a rough start for BC Ferries workers after they had to deal with multiple groups of belligerent anti-maskers who were on their way to a rally in Vancouver.

“We had anti-maskers trying to make their 2 o’clock rally in Vancouver. There were at least three or four different groups wanting to showcase their political views,” said Kevin Lee, a worker who was on that sailing.

One man became so belligerent, the sailing from Swartz Bay to Tsawwassen had to turn around and return to the dock, so the man could be escorted off the boat by police.

“Fortunately, I found three undercover plainclothes policemen on board. That helped. It could have escalated to something bigger,” said Lee, who is also the provincial vice president for the BC Ferry and Marine Workers Union.

“We had to turn the ship around and board at the dock to get one person off who was causing the most disturbance.”

Over the long weekend, not only were extra sailings added to the routes but the cafeteria remained open, even though all other restaurants in B.C. have had to ban indoor dining due to the new provincial rules.

“The nature of our work means that we’re often in tight quarters with passengers and other crew. Were performing an activity that the provincial health office has closed in restaurant service,” said the union’s treasurer Brian Lalli.

“Restaurants have been closed right throughout the province and that’s work that we do, and we’ve been left off the vaccine list.”

Some essential workers were supposed to be on a vaccine priority list with the new incoming AstraZeneca vaccine.

Due to blood-clot concerns, however, the use of that vaccine has been put on hold for people under the age of 55, meaning that the vaccine rollout plan has been temporarily stopped.

“Many workers and first responders we were starting to get into that program. We need to regroup, will come back early next week once we have more info to determine how we’re going to move forward with that program,” said provincial health officer Dr. Bonnie Henry on Thursday.

BC Ferries workers were never on that list to begin with.

“It’s really a kick in the teeth,” said Lalli. “We’re an essential service, we’ve been working throughout the pandemic and we need to be vaccinated.”

The Ministry of Transportation says it will push for vaccines for BC Ferries employees.

Workers hope that if essential workers are to get a jump ahead for a vaccine, that this time, they’ll be on the list. 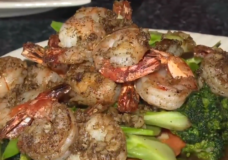