British Columbia health officials have reported 378 new cases of COVID-19 and seven new deaths since their last update on Wednesday, while announcing the interval for age-based vaccine doses would be shortened to eight weeks.

Thursday’s update brings the total number of cases in the province to 143,264 and 1,690 deaths overall.

Of the new cases, 98 were reported in Vancouver Coastal Health, 189 in Fraser Health, nine in Island Health, 68 in Interior Health and 14 in Northern Health.

There are 3,543 active cases in the province, 286 of whom are hospitalized with 88 in critical care or ICU.

More than 137,000 people have recovered from the disease, while another milestone was reached in B.C.’s immunization program with more than three-million doses delivered. Of those, 156,730 are second doses.

In Island Health, there are currently 92 active cases of the virus, according to the health authority’s dashboard.

Thirty-two of those cases are on the South Island, 37 are on the Central Island and 23 are on the North Island.

Provincial Health Officer Dr. Bonnie Henry also announced the interval between first and second doses of the vaccines used for the age-based cohort — Pfizer and Moderna — would be dropped to eight weeks.

“This second booster dose is important for your own individual protection,” she said. “It ensures you have maximum protection for the maximum amount of time.”

Henry said with the availability of vaccines ramping up, she anticipates everyone will be able to receive their second dose by the end of summer.

The second dose program will be based on the same principles of dose one, Henry said, with those at the greatest risk getting their jabs first including the elderly and extremely clinically vulnerable people.

Around 400,000 people over the age of 70 and those who are clinically vulnerable will start receiving invites for second doses immediately, she said.

Those communities that were vaccinated all at once in a whole-community approach will also take the same approach for second doses. Eligible communities will be contacted through their regional health authorities.

In some cases, those who received Moderna for their first dose may receive Pfizer for their second dose, Henry said.

“I would encourage people to take the Pfizer if it is on offer,” she said. “We have just heard today that we are going to be receiving more shipments of Moderna, but we know it is safe and works just as well if you have one or the other of the mRNA vaccines.”

Meanwhile, those who received the AstraZeneca vaccine for their first dose are being asked to “hold tight” for a few more days until more information is available on when the optimal time is to receive their second dose, said Henry.

“What we have seen is that this vaccine has a better response with a slightly longer interval between doses,” she said. “So we are looking at what that means for people here in B.C.”

Henry also provided an update on faith-based services Thursday, saying indoor worship services can once again resume with a limit of 50 people and detailed COVID-19 safety plans in place.

“I look forward to our ongoing revision and opening up of all indoor faith services in the coming steps of our restart program,” she said.

Henry also said guidelines surrounding overnight camps for children and youth will also be revised amid ongoing discussions with associations and details are expected as soon as next week.

Thursday’s update comes after the province announced details of its new restart plan on Tuesday.

B.C.’s circuit-breaker measures that shut down indoor dining were immediately lifted, with a cap of up to six people for indoor dining, while indoor group fitness and indoor worship services were also able to resume in a diminished capacity.

Seated outdoor organized gatherings such as weddings will be permitted again as well with a maximum of 50 people, so long as safety protocols are established.

According to the Ministry of Health, the breakdown for first doses by age cohort so far are as follows: 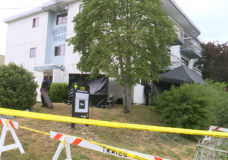