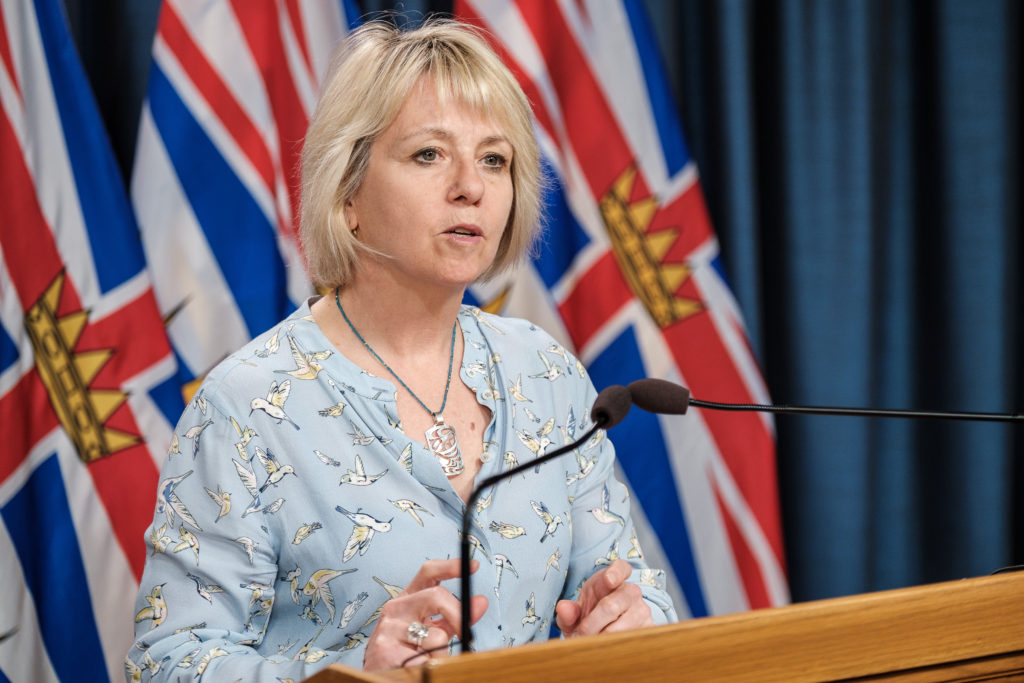 Dr. Bonnie Henry, the provincial health officer, said there were 82 new cases of COVID-19 in B.C. in the last 24 hours, including one new case in Island Health.

One of the new cases is epidemiologically-linked, meaning a person who was never tested but presumed to have COVID-19 because they developed symptoms and were close contacts of a laboratory confirmed case.

There are 69 people with COVID-19 in hospital (down three from Sept. 30), with 19 in intensive care (down two from Sept. 30). Of those hospitalizations, 29 are in Vancouver Coastal Health, 36 are in Fraser Health, two are in Interior Health and two are in Northern Health.

Since the start of the pandemic, there have been 209 cases in Island Health, 3,360 in Vancouver Coastal Health, 4,712 in Fraser Health, 535 in Interior Health, 317 in Northern Health and 87 among people who normally reside outside of Canada (visitors and temporary foreign workers).

There are no new community outbreaks. There is one new healthcare outbreak at the George Derby Centre in Fraser Health. This is the second time an outbreak has been declared at this long-term care facility.

Henry said on Thursday that a record number of COVID-19 tests (10,889) were done in B.C. in the last 24 hours. The per cent positive ( the percentage of all coronavirus tests performed that are actually positive) is under one per cent (0.75 per cent).

Henry said there has been “linear increase” in the province but not exponential growth. She added there continues to be transmission throughout the province.

She also said on Thursday, she knows there is concern and anxiety around schools.

“We want everybody to be safe,” Henry said. She added that while communication wasn’t perfect initially, each school has a COVID-19 plan and is liaising with their school health officer all across the province.

“We are doing our best. We don’t always get it right, right off,” Henry said.

Henry said a school exposure is when a single person is confirmed positive for COVID-19 and has been in the school during their infectious period. A cluster is when two or more people who are positive have attended school. An outbreak is when there is an ongoing transmission and officials not sure who is transmitting to whom.

Henry said as of Thursday, there have not had any outbreaks in a school setting in B.C. There have been cases and smaller transmission events.

According to Henry, every time there is a school exposure, contact tracing kicks in. Even if someone is in a school, they may not be at risk of exposure, she said.

“If somebody has been exposed to this virus, there is nothing we can do to prevent them from getting sick,” she said.

“What we need to do is keep them away from others during that incubation period. If they develop symptoms, then we can be sure they are not transmitting it.”

There are no COVID-19 hospitalizations in Island Health and 199 people have recovered. A total of 1,107 tests were done in the last 24 hours. 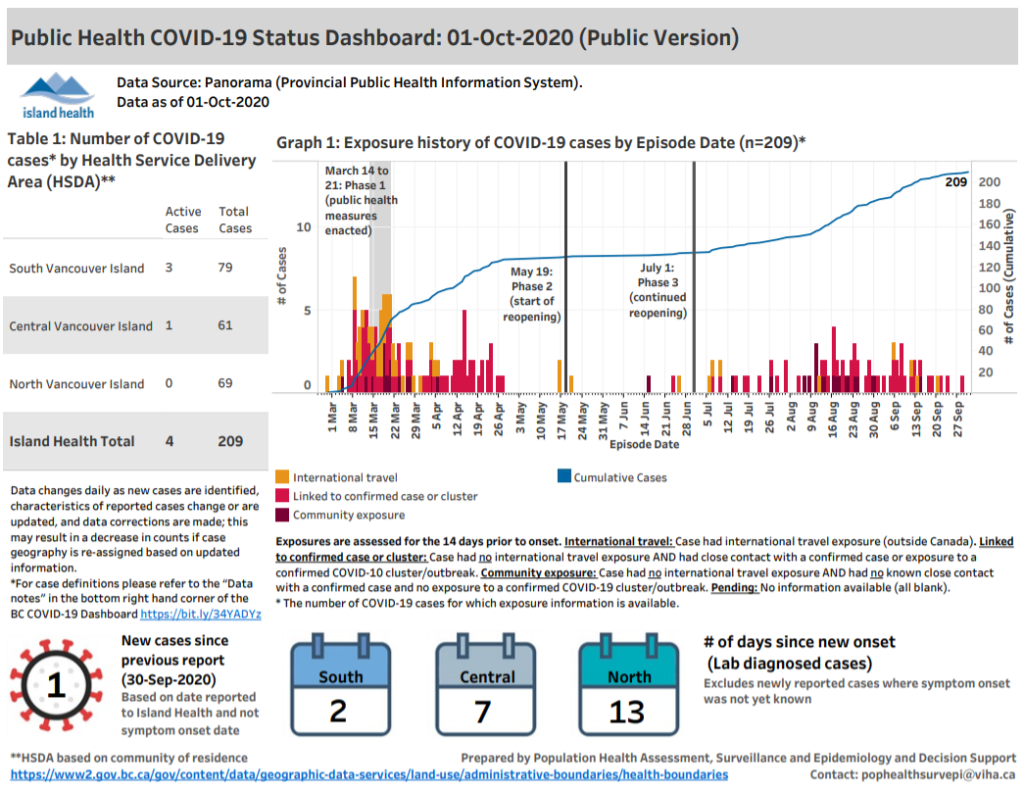 Henry also addressed the rally that was held at the B.C. legislature on Sept. 29 by families asking for increased visitation in long-term care.

“This is something that we’ve been paying attention to. And it’s so challenging.”

Henry said health officials want to make sure there continues to be enough personal protective equipment (PPE) to support visitors, appropriate staff and that the processes in place, like essential visits, can remain in place as the pandemic continues.

She said officials are looking at whether an alternate person could do visits instead of one person at a time. But Henry added there is always the risk that a potential COVID-19 exposure can affect an entire long-term care facility.

If there is a confirmed COVID-19 case in a school, public health contacts affected school community members directly. Regional health authorities also post school notifications on their websites, providing the date and type of notification (outbreak, cluster or exposure) for impacted schools.

B.C. has posted detailed information about the geographic distribution of COVID-19 cases from January to August 2020. This map will be updated monthly, according to B.C. health officials. 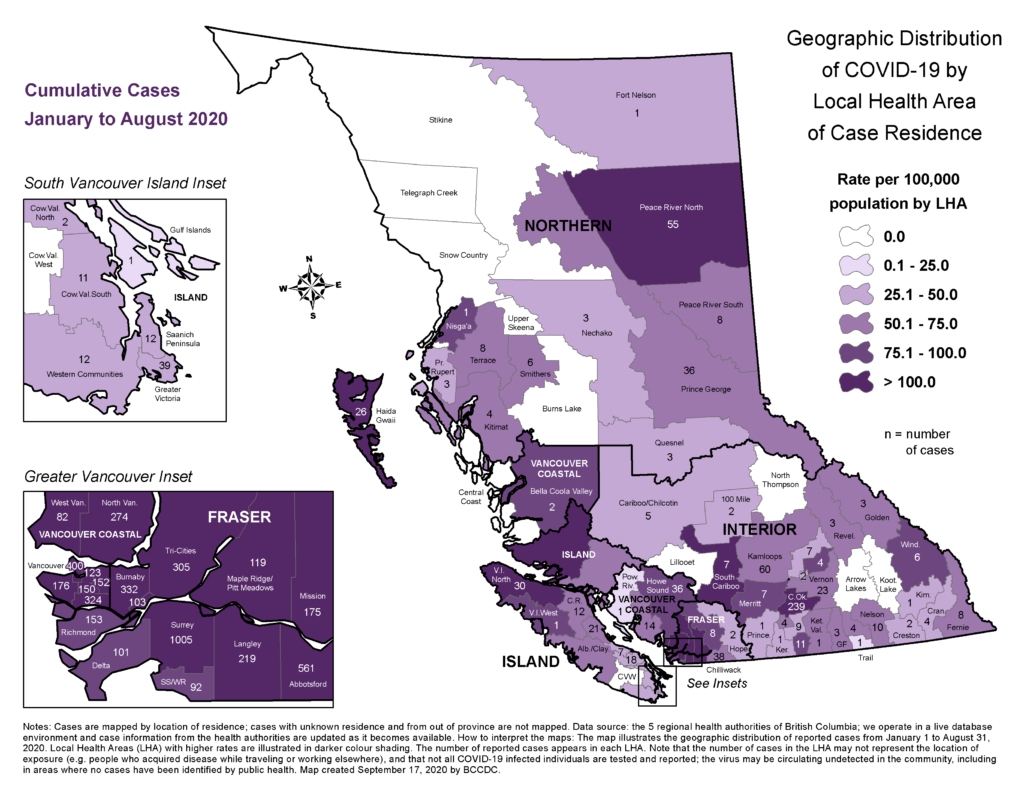 Geographic distribution of COVID-19 cases in B.C. from January to August 2020 (BC CDC)

To see a list of all provincial public COVID-19 exposures in the province, including links to exposures listed on health authority websites, visit the B.C. Centre for Disease Control website (CDC) here.

According to data collected by Johns Hopkins University and Medicine, the number of confirmed COVID-19 cases worldwide is more than 34.1 million. More than one million deaths have been recorded. 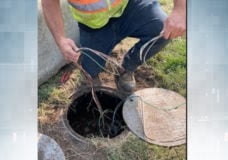