The Colquitz River lazily winds its way through the forest on the Saanich Peninsula.

But biologist and executive co-ordinator for the Peninsula Streams Society, Ian Bruce, knows what areas of the river are in poor shape.

“There is nothing holding it together. It’s vertical. And there is nowhere for fish to live,” Bruce said.

Coho salmon and cutthroat trout spawn in the river, but the habitat is suffering. An announcement Friday by both the federal and BC government will benefit this river and the fish below its surface.

“Canada is contributing $100 million over the next five years. With the key focus on supporting projects directed at biodiversity and salmon habitat protection and restoration,” Federal Fisheries minister Jonathan Wilkinson announced.

“I’m so delighted that the province of British Columbia can contribute $42 million to the salmon restoration fund to make sure that we are working on critical issues with community hatcheries, with habitat restoration,” Premier John Horgan said.

Reaction from groups involved with wild salmon stocks is mainly positive, including comments from the executive director of the Pacific Salmon Foundation, Brian Riddell.

“There isn’t any question in my career now, 42 years, this is the biggest insurgence of funds for people to really do good things with,” Riddell said.

Owen Bird, the executive director of the Sport Fishing Institute of B.C., said it is a positive step.

“And really nice to see the province and the federal government working together,” Bird said.

But there is one word of caution from Aaron Hill, executive director of the Watershed Watch Salmon Society.

“The really big challenge we face with salmon are not going to solved by this money. They are going to be solved by stronger leadership, and actually protecting salmon habitat in the first place,” Hill said.

Back at the Colquitz River, Bruce said he already has plans to restore areas of the river.

“One thing, if you work with salmon as long as I have is that you’re always surprised by them. Usually pleasantly surprised. You’ll find them somewhere where you’ll go, they’ll get there, well they do.” 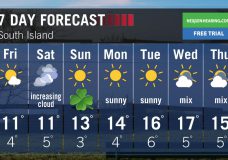 Forecast: Some rain for the North & West Island tonight and Saturday otherwise it's a mainly sunny weekend for Greater Victoria 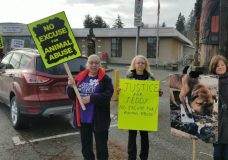