April 7, 2021 updated
CHEK News
A patio at Jam Cafe in Victoria, B.C. is shown in this file photo.

B.C. will deliver a new aid package for the province’s beleaguered restaurant sector on Thursday, and the province’s minister in charge says the key will be to get money flowing quickly.

Economic Recovery Minister Ravi Kahlon told CHEK News he’s less interested in crafting entirely new aid programs for restaurants as he is finding a way to get economic aid out without delay.

“The main focus I’ve given to the ministry is it needs to be quick and it needs to be efficient in how we can process and get money to businesses that we know need it right now,” said Kahlon.

“Those are the main criteria. Building brand new programs takes months and that’s certainly not something I’m interested in for supporting our businesses right now.”

B.C.’s Opposition Liberals say the aid announcement is welcome, but the province shouldn’t have waited nine days since announcing a ban on in-person dining last week.

“John Horgan standing next to Bonnie Henry in that press conference should have taken the opportunity to acknowledge the additional pain this was going to cause the restaurant sector and announce supports.

“Instead, he’s allowed over a week-and-a-half to go by with everyone in the sector wondering if additional supports will materialize.”

Without a new program, B.C. appears poised to announce a series of relief measures that involve deferrals of taxes, licenses and fees, as well as enhanced eligibility for restaurants within existing COVID-19 aid programs.

Such a move would allow restaurants to avoid paying, for example, liquor licensing fees and surcharges owned to the province’s liquor distribution branch for the time being. The province could also choose to defer employer health tax contributions, the provincial sales tax, property taxes and other measures it directly controls.

However, B.C. has struggled to get money through its existing programs in a timely manner. It had to push back an end-of-March deadline for its $300-million small business recovery grant program — which offers up to $30,000 for businesses or $45,000 for tourism-dependent businesses — because of red tape, cumbersome rules and difficulty processing applications.

“Normally putting programs together takes months and we’re trying to do everything in weeks,” he said.

“We know the window for businesses to adjust was short, and they need the supports now. That’s top of mind for me and it keeps me up at night.”

Stone said the aid package should include some way for government to cover the cost of food and supplies purchased by restaurants on the Monday that government blindsided them with the closures, which now can’t be used. In addition, the province should beef up existing aid programs so applications are processed faster, as well as defer as many taxes as possible.

What is not expected in Thursday’s aid package is direct support for restaurant employees who have lost their jobs, or shifts, due to the in-person dining closure.

Currently, those employees must apply for federal Employment Insurance, which Ottawa has beefed up during COVID-19. The previous Canada Emergency Recovery Benefit of up to $2,000 per month expired last winter.

Although most of the responsibility is federal, Stone said B.C. could extend a helping hand to workers here as well.

B.C.’s restaurant sector employs more than 180,000 people. During a closure of in-person dining last year, more than 110,000 employees either lost their jobs or suffered reduced hours of employment. 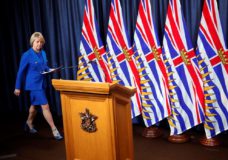