Health officials in B.C. say once the province starts to remove COVID restrictions, it will be done slowly, not all at once.

This is despite several jurisdictions, including Alberta and the United Kingdom, announcing they will be removing most restrictions in the coming month.

Jason Kenney, premier of Alberta posted an announcement on Twitter where he said the restrictions will be removed.

“We will also lay out a simple phased plan to remove almost public health restrictions later this month,” Kenney said.

Early next week, the COVID cabinet committee will approve a plan to lift restrictions, starting with the Restrictions Exemption Program.

We can – and must – get on with our lives, restore our freedoms, and live with joy, not fear.

In the United Kingdom, mask mandates have been lifted and vaccine passports are no longer required.

“It will not be a flick of a switch, it will be, again, increasing the dimmer switch, a gradual turning of the dial,” Henry said on Monday.

An independent COVID modelling group says this is the right approach to take.

“I’m not certain that we have enough room to maneuver to open up much, maybe a little,” says Sally Otto, researcher with the BC COVID-19 Modelling Group.

Otto says the new Omicron sub-variant BA.2 plays out in the province. The strain is more infectious, and has been found in B.C., but little is known yet about its impact.

“Does it have an easier time getting into our bodies? Does it have a higher viral load? Or is it simply better at reinfecting people? It’s still a little uncertain I would say,” Otto says.

The Omicron variant tends to cause more mild illness in most, but it’s still causing high levels of death in the province.

Island Health had its deadliest week since the start of the pandemic with 11 deaths this week in the health authority.

In the province January had the third highest number of deaths, with 220 deaths, according to the Ministry of Health.

January’s deaths were comparable to the months with the highest number of overdose deaths last year, where 201 people died of drug overdose in October 2021, and 192 people died in July 2021. 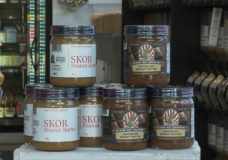