British Columbia Liberal Laurie Throness is quitting as a party candidate in the Oct. 24 provincial election after comparing free birth control to eugenics.

The NDP released a videotape in which Throness said at an all-candidates meeting Wednesday that the NDP promise to provide free contraceptives appears similar to past eugenics plans to stop poor people from having more children.

A statement from the Liberal party on Thursday says Throness has accepted that his comments were wrong and inappropriate.

The statement says it was clear that Throness could not be part of the B.C. Liberal team.

Throness, who was the member for Chilliwack-Kent in the last legislature, has been under fire in the past for telling the media he would continue to buy advertising in a Christian magazine that published articles supporting conversion therapy for LGBTQ people.

The Liberals will be without a candidate in the riding as nominations closed on Oct. 2.

Elections BC could not immediately be reached on whether his name will still appear on the ballot.

The all-candidates meeting was held virtually, with eight candidates taking part in a video forum in which the moderator asks it is right for the government to provide free contraception to everyone.

Throness replied that he gets approached by people for medical expenditures a few times a day.

“I have no problem with contraception, it’s not a moral issue to me. But to me, it would not rank as high on the priority list,” he said.

“The other thing that I feel about this is that it contains a whiff of the old eugenics thing where, you know, poor people shouldn’t have babies.

“And so we can’t force them to have contraception, so we’ll give it to them for free. And maybe they’ll have fewer babies. So there will be fewer poor people in the future.”

He said that “contains an odour” he doesn’t like and he doesn’t support the New Democrat plan.

The B.C. Liberal statement says it’s “dedicated to a diversity of perspectives, but all party members are dedicated to inclusiveness and equality – that is not up for debate.”

“Those statements about contraception were completely wrong. I have therefore accepted Laurie Throness’ resignation as a candidate for the BC Liberal Party in the upcoming election,” he said.

Meanwhile, Wilkinson appeared on the leaders’ radio debate earlier Thursday. This time he and NDP Leader John Horgan took swipes at each other during a discussion on ICBC and BC Hydro rate.

“That’s reality. Not fiction like you just described to me,” Horgan said to Wilkinson about his remarks on BC Hydro.
“Most of what you just said is completely untrue. You’ve told a series of lies in the last thirty seconds that you should apologize for,” Wilkinson shot back.  But Horgan continued with an attack on the Liberal’s record on Medical Services Premiums.

“Did you double MSP premiums? “Yes, you did. Yes you did,” Horgan said. Wilkinson resonded with,  “You’re making that up.”

Associate Professor of Political Science at the University of British Columbia,  Gerald Baier, said the leaders are trying to appeal to voters with just days left in the campaign.

“Horgan is a happy go lucky premier dad. And he wants to try to get that across. He’s doing that. But he, that also gives him some potential for gaffes,” Baier said.

“What happens in a snap election, is literally privileges privileged people who have that capacity to drop their lives and be able to jump into this,” Furstenau said.

But Baier doesn’t think this will help the party’s chances.  “Furstenau is the sincere, Green Party politican that they choose. And she’s good at demonstrating that. But again, the question is how much can that carry the party? And how much can they actually take advantage of it?” 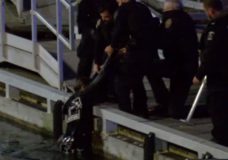 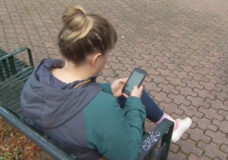