The B.C. government will be using its provincial health registry to contact parents in an attempt to increase flu vaccination rates for children.

While the province is on track for a record number of people getting their flu shot this year, Dr. Penny Ballem with BC Vaccine Operations, says only 20 per cent of children under five have been vaccinated.

Ballem says they’ll be sending texts and emails to families of about 150,000 children under five inviting them to make appointments to get vaccinated.

Provincial Health Officer Dr. Bonnie Henry says after two years of low rates of flu, mostly due to travel restrictions, the province is seeing a “dramatic increase” in illness and it arrived sooner than normal.

Henry says there is still time for people to get a flu vaccine to protect themselves and their children, especially as the holiday season approaches.

Health Minister Adrian Dix says visits to provincial emergency rooms had been averaging 6,700 per day, but that is now peaking up to 6,900 patients daily, with extra pressure on B.C. Children’s and Fraser Health hospitals.

It was an especially busy weekend at the BC Children’s Hospital in Vancouver, with estimated wait times of more than 10 hours on Friday and nine hours Saturday.

Reports surfaced that the hospital was briefly placed into “Code Orange,” which is generally used for situations that could lead to “disaster or mass casualties.”

Dix confirmed Monday that the Code Orange was called at 6:35 a.m. Saturday and cancelled less than a half hour later at 7:03 a.m. He said the alert was triggered based on information available at the time, and promptly cancelled after new information came in.

On Sunday, the hospital told CBC News that it was not diverting patients and no child needing the highest level of pediatric care would be refused admission.

Influenza visits on the rise

The BC Centre for Disease Control reports that children between the ages of 0-14 have been showing up at community health facilities presenting respiratory illness symptoms — particularly influenza.

“This indicator has been increasing, with the biggest increase in visits for acute respiratory infections seen among children and youth, and, more recently, for influenza-related symptoms,” the BCCDC said. 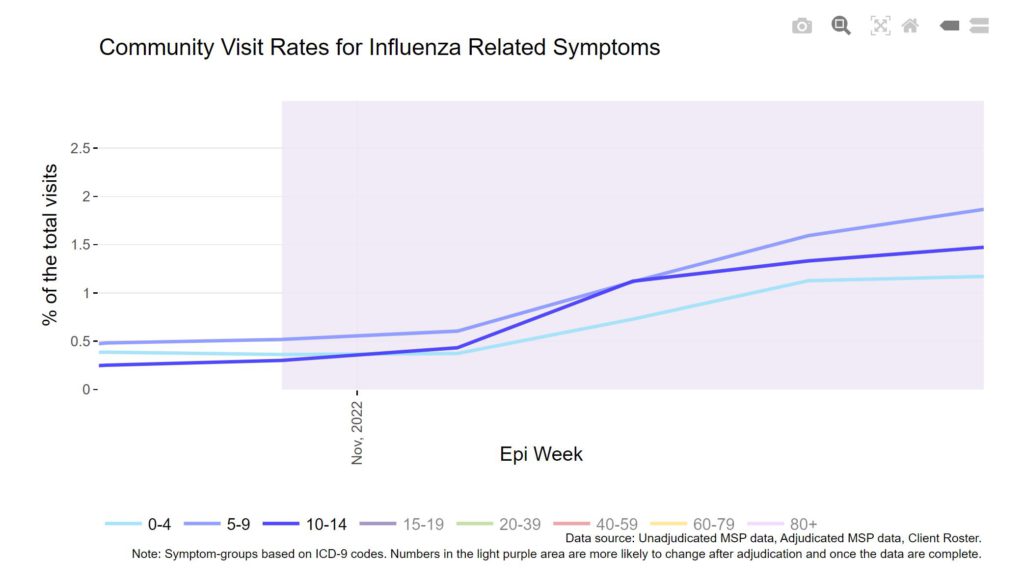 A BCCDC graph shows an increase in the number of children ages 0-14 presenting flu symptoms at community health facilities.

Test positivity for influenza A has remained high at 24 per cent, with H3N2 the predominant subtype detected, the BCCDC said in its latest surveillance report for the epidemiological week of Nov. 20-26.

Respiratory viruses have been surging this season, with health facilities that were already overburdened by COVID-19 struggling to keep up.

In Alberta, the Children’s Hospital in Calgary has seen so many patients admitted with respiratory illnesses that the province is redeploying staff from a pediatric hospice in order to help.

On Vancouver Island, respiratory illness-presenting patients have accounted for a daily average of 84.7 visits and 18.2 admissions to Island Health Emergency Departments from Sept. 1-Nov. 15, by far the highest those numbers have been in the last five years. 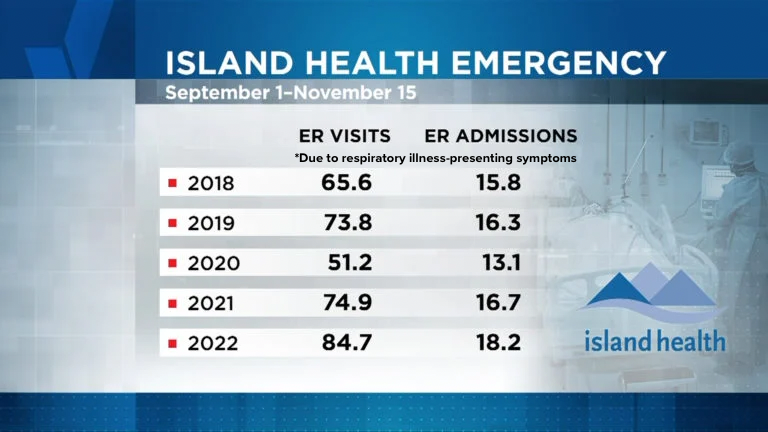 Last month, Henry said despite influenza cases being up, there was no need for the “heavy hand” of a mask mandate to be reintroduced in B.C.

Henry added that masks should still be used in situations where they make sense, such as health-care facilities. 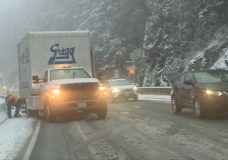 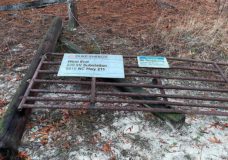