Some of the AstraZeneca COVID-19 vaccine currently being administered to patients on the Lower Mainland was originally intended for Vancouver Island residents, according to a high-ranking health authority doctor.

B.C. government recently permitted pharmacies in both Vancouver Coastal and Fraser health authorities to begin immunizing those between ages 55 to 65 with the AstraZeneca/COVISHIELD vaccine starting today in order to curve a growing number of new cases.

But according to Island Health‘s chief medical health officer, Dr. Richard Stanwick, hundreds of the new doses being given out on the Lower Mainland were intended for Vancouver Island.

Instead, according to Island Health, residents will be receiving Pfizer and Moderna vaccines in its clinics.

The revelation that vaccine doses were diverted to the Lower Mainland comes as Vancouver Island, like the rest of the province, experiences a sharp spike in new cases.

However, B.C.’s health minister, Adrian Dix, reassured Vancouver Islanders that the island is getting its share of vaccines.

“I can tell people on Vancouver Island, that the level of vaccine hesitancy there is low,” Dix said from Vancouver. “The vaccine being delivered is high and people are doing an excellent job.”

Victoria pharmacist Lindsay Dixon said pharmacists on the Island are ready to go, if called into action.

“We have to know how to book in patients,” Dixon said. “How many doses they are getting. I have no doubt that pharmacists will be able to get this done.”

The province maintains that everyone who wants one will be vaccinated before July 1st. 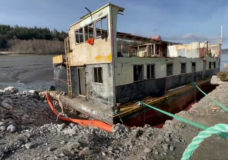