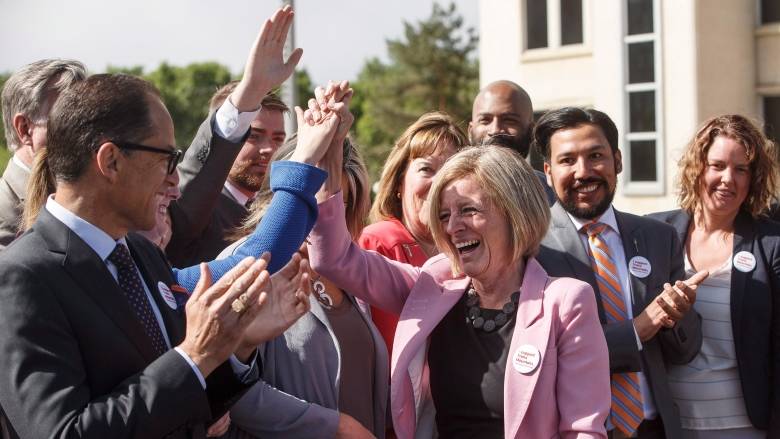 Alberta Premier Rachel Notley was applauded by her staff and caucus after a news conference Tuesday on the federal government’s purchase of the Trans Mountain Pipeline. (Jason Franson/Canadian Press). Photo courtesy of the CBC.

Alberta Premier Rachel Notley took a Trans Mountain victory lap on the grounds of the legislature Tuesday while her political opponents questioned whether the province has won anything and, if so, at what cost.

The premier high-fived and hugged her caucus mates at a news conference where she announced that Alberta’s months of lobbying, cajoling, arm-twisting, court fights, a wine ban and a legislated threat to cut oil shipments to British Columbia had resulted in the federal government taking over the pipeline and its expansion on the west coast.

“Today we take a major step forward for Albertans and for all Canadians,” said Notley.

“This deal – and this pipeline – will unlock investment in our oilsands because we’re now on the path to getting full value for our energy resources.”

Hours earlier, the federal Liberal government revealed that it will spend $4.5 billion to buy Trans Mountain and all of Kinder Morgan Canada’s core assets.

In return, Kinder Morgan will go ahead with its $7.4-billion plan to twin the pipeline carrying diluted bitumen from Alberta’s oilsands to the B.C. coast and from there to overseas markets.

Alberta is making up to $2 billion available if needed to keep the project going, but Notley said it’s “very possible” the province will never pay a cent of it.

Kinder Morgan had set a Thursday deadline to gain certainty over the project or abandon it altogether. Notley said construction is to resume on the line within weeks.

Opposition United Conservative Leader Jason Kenney said his caucus reluctantly backs the $2-billion investment because the line must be built. But he suggested Notley and Ottawa have tried to buy their way out of a problem which faces the same staunch resistance it did before.

“This seems to be the NDP’s definition of success _ being backed into a corner and forcing taxpayers to pick up the tab,” Kenney told the legislature.

Alberta Party Leader Stephen Mandel said the decision sends a message to investors that even if a project is approved in Canada, they still might have to sell rather than build because the rule of law can’t be enforced.

Political observers said it’s not clear how the pipeline’s resurrection will affect next spring’s election.

Duane Bratt said it’s too soon to say whether Trans Mountain will give Notley a bump in the polls, but no deal by Thursday would clearly have been a killer.

“Whether she wins (the election) that’s another story, but had this not happened, she was toast,” said Bratt, a political scientist at Mount Royal University in Calgary.

Calgary-based pollster Janet Brown said the premier should be careful not to be seen celebrating prematurely on a file – and a provincial economy – that has been bedevilled by swings and setbacks.

“It might have been a miscalculation on the premier’s part to do the victory lap,” said Brown.

Notley’s New Democrats have been pushing for Trans Mountain since they were elected in 2015.

Ottawa approved the expansion in late 2016 but the project faced permit delays and court challenges in B.C. The issue came to a boil in late January when B.C. Premier John Horgan said his government would seek to limit any extra oil shipments through the province due to concerns over oil spills.

In response, Notley temporarily banned B.C. wine, then hit the road to build public support for the pipeline. Earlier this month, her government passed a law giving Alberta the power to limit oil and gas exports to other regions, which could cause gasoline and jet fuel prices to spike in B.C.

Notley said Tuesday she sees no need to turn off the oil taps to B.C. for the moment, but said she still has the law in her back pocket. 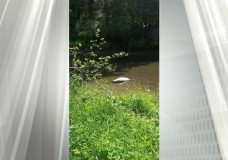