WATCH: A mystery has taken flight in the Comox Valley where an influx of sick eagles is pouring into a wildlife rescue. Ten eagles have been admitted in just two weeks, from Port Hardy to Hornby Island, and many are displaying the same distressing respiratory problems and dying.

The mournful sound of huffing has replaced the usual quiet of breathing from eagle after eagle at Mountainaire Avian Rescue Society’s Mission Wildlife Rescue (MARS) in Merville.

Comox Valley rescuers are trying to cope with an influx of 10 sick eagles in just two weeks, many in respiratory distress.

“It has been non-stop,” said Kiersten Shyian, an animal care technician at MARS Wildlife Rescue Centre.

They are trying to solve the mystery of what’s hitting these birds so hard.

“Unfortunately we’ve been seeing a lot of respiratory issues in these birds so that’s been, it’s been quite frustrating,” said Shyian.

“It could be a number of different things.”

A large breeding female eagle was admitted from Hornby Island on Thursday.

Her breathing is just as strained. It sounds more like the honk of a goose and rescuers say her open mouth is a dead giveaway that she’s struggling to get air in to her lungs.

“We’ve had several that have come in with respiratory issues,” said Shyian.

“We had one that actually he died yesterday and we’d been working on him for a few days.”

MARS said adding to the mystery is that the birds have come from across Vancouver Island, Port Hardy to Gold River and south to Hornby Island.

The remains of the seven eagles that have died over the last two weeks are now being tested to determine a cause and the patients that are still under the wing of caregivers are being given oxygen and fed by tube to keep them going until an answer is found.

“Never to have this many at one time to have that respiratory issue,” said Shyian.

“All at once has been quite a challenge to tackle.”

Rescuers are urging people to keep their eyes open for eagles in trouble and call them for help at  (250) 337-2021 if it looks like the birds need it. 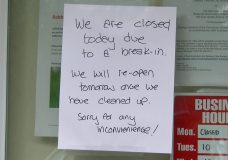 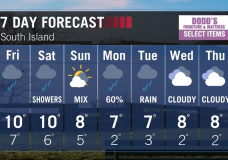 Forecast: Rain tonight and wind warnings are up for the north, west and east Vancouver Island