Bushy and bright Douglas firs are a top choice for many at Christmas time.

But in the wild, the popular tree is in danger.

“I think there’s a lot of questions because the changes are so sudden and just started to be documented on a large scale. But it’s definitely worrisome,” said Debbie Stroshein, who owns Happy Holidays Christmas Tree Co. in Langford.

“It’s an epidemic status because a lot of trees are infected and it impacts the growth of the tree,” said Dr. Nicholas Feau, a scientist with Natural Resources Canada.

Scientists first noticed the disease in Oregon and Washington roughly 20 years ago, but now it’s suddenly becoming a problem in B.C.

“We think this change is related to a change in the climatic condition,” said Dr. Feau.

B.C.’s now warmer winters and wetter springs are allowing the fungus to thrive. Cowichan Lake, Parksville, and Campbell River have been identified as some ‘Swiss needle cast disease’ hotspots on Vancouver Island.

The telltale sign of the disease is black dots on the underside of the needles and an unusual amount of needle loss.

Some small seedlings do die, but for Dr. Feau the biggest concern is that the fungus causes Douglas firs to grow slower, and the delay that means for logging and Canada’s reforestation efforts.

“In Oregon, they have had this problem for 20 years, maybe more. It costs them in terms of U.S. dollars, $200 million every year,” said Dr. Feau.

A similar estimate of how much this disease will cost British Columbia’s forestry industry isn’t available, but B.C.’s Ministry of Forestry is already 4-5 years into breeding a Douglas fir type that is resistant to the disease.

The ecological impacts are not yet known. But as temperatures on B.C.’s coast are only projected to rise, so too are the projected prices for Douglas firs. 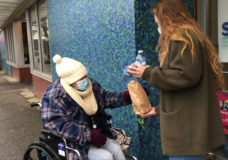 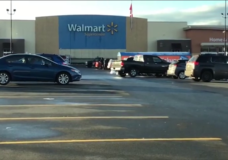