Martindale Road and Perry’s RV park on the Englishman River south of Parksville are usually the first in the area to flood during a big storm.

Twenty-one people were evacuated from the RV park when the water started rising early Monday morning.

“The water was rising, it was getting significant and the water was flowing quite quickly so we wanted to take the opportunity to get search and rescue teams in and get occupants out of the park before it got to be a problem.” said Parksville Fire Chief Marc Norris.

Comox Valley Ground Search and Rescue was one of four search and rescue (SAR) teams tasked with rescuing the residents.

“Teams loaded boats and virtually hauled them out, four or five people in the water pulling these boats through the current so we could get people to dry land,” said Comox Valley Ground SAR manager Paul Berry.

Many properties along creeks and rivers were flooded as they burst their banks.

Melrose Road in Whiskey Creek washed out during the storm.

“Around midnight or 12:30, I heard what I thought was thunder. By the time daylight broke, we were dressed. We walked out and had a look and here is this great gap in the road,” said Arlene King who lives beside the road that washed out where Whiskey Creek used to run under it through a culvert.

People who live in the area say it?s a miracle no one drove into the hole.

“Absolutely thankful nobody was hurt,” said Sara Orr, who lives nearby. “I can?t believe somebody found this in the dark and didn?t end up driving in so she?s really lucky.”

Concrete barriers were put in place late Monday morning to close the road but the Regional District of Nanaimo isn’t saying how long it will take to repair the road. 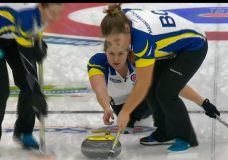 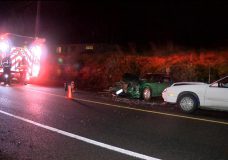