15-year-old arrested after break-and-enter in Langford

A 15-year-old girl was arrested early Thursday morning in connection with a break-and-enter in Langford.

At around 3:40 a.m., West Shore RCMP got a 911 call from two homeowners who said that a woman was inside their residence in the 2700 block of Jacklin Road. The suspect was allegedly moving their personal items out of their residence.

Police said one of the homeowners were able to grab the suspect and detain her until police arrived.

The suspect, a 15-year-old girl from Langford, was arrested for the break-and-enter as well as breaching court-imposed conditions. She is in custody pending a court appearance. 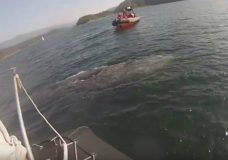