The BC Coroners Service is investigating after a woman drowned at Matheson Lake in Metchosin on Tuesday.

On July 21 at 6:45 p.m., West Shore RCMP, Metchosin Fire Rescue and BC Ambulance paramedics responded to a 911 call about a possible drowning at the popular swimming and hiking park.

According to police, witnesses said a 32-year-old woman had been rescued from the water and was in medical distress. Friends and witnesses started CPR prior until the West Shore RCMP arrived, first on scene.

West Shore RCMP, along with an off duty Oak Bay police officer and an off duty Saanich firefighter administered CPR until paramedics could arrive, but the woman was far from the main entrance.

“There’s a main parking lot and roughly 400 feet down is a trail that you get down, so we had to unlock gates and get our vehicles down there. And from the main beach spot she was roughly 500 feet metres off that,” said Metchosin Fire Chief Stephanie Dunlop.

Dunlop says due to the terrain, fire crews took the woman back to the ambulance by boat.

Dunlop said she is grateful for the witnesses who jumped in to help.

“Thanks to all the bystanders who were there who stepped in and supported us, helped us out, helped move equipment, moved our boat down into the water, just supported her and making the scene go as smoothly as possible,” said the fire chief.

The woman was taken transported to hospital in critical condition, but the BC Coroners Service confirmed Wednesday the woman had died.

This heartbreaking incident is a stark reminder of the importance of being water aware, especially this time of year.

“It just so happens this is National Drowning Prevention Week, and we choose this week because often there are higher numbers of downing in the third week of July,” said Dale Miller, executive director of BC and Yukon Lifesaving Society.

With more people heading outside to lakes and rivers as the temperature increases, Miller says the number one way to prevent these kinds of emergencies is to make sure you know the water you’re heading in to.

“Some of the lakes are still very cold. Some of them have drop-offs very close to shore as well. Some have rocks and logs just under the surface, so people need to know the area they’re hopping into and be very careful and cautious,” said Miller.

He also recommends life jackets for any boating activities and to go with at least one other person when venturing into outdoor activities like hiking or fishing.

This recent death is the 17th drowning this year in BC and the Yukon.

“That’s down from previous years, which is a good thing,” said Miller. “It’s probably because people have been inside because of COVID, but its still [17] too many.”

The BC Coroners Service has taken over the investigation of this latest drowning.

The identity and other details about the woman have not been released. 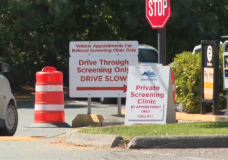