Wolf attacks ramp up in village of Tahsis, leaving residents on edge

The Vancouver Island community of Tahsis is on edge as it deals with an influx of wolves that have killed and maimed dogs and are even suspected of taking down a black bear.

The wolves began showing up two to three months ago and three of them are now believed to be in and around the town, according to residents.

Several pets have been killed and one dog was severely injured last week in the yard beside Tamara’s Cochrane’s house.

“They just let her outside for two minutes to pee outside, which they normally do, and then she wandered in behind the greenhouse and they were waiting back there for her and it just lunged on her,” she said.

The bull-mastiff was big enough to break free had to go to a Campbell River vet for surgery, with the owner now facing thousands of dollars in vet bills. A GoFundMe has been launched to help them pay for the animal’s recovery.

Cochrane has two young children and she, like other parents, is extremely worried about what seems like a pack of wolves coming into the village.

“Two nights ago I got a call at about 7 p.m. from the landlord and she told me to get all the pets and kids inside because a wolf was just a couple of units down running towards us,” she said.

On Friday morning, a small bear was found killed and eaten in the middle of the village.

Tahsis Mayor Martin Davis said he’s lived in the village for about 20 years and has only ever seen one wolf on the outside of town before now.

Meanwhile, those living in the area have been walking their dogs carrying sticks or bear spray.

“I usually walk on that side of the street but because of the brush they could come out of nowhere,” said resident Thomas Bendle.

The BC Conservation Officer Service is aware of the situation, but has so far been unable to track down the wolves. 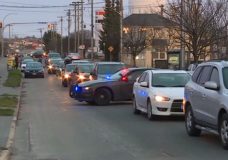 Man tried to pull woman out of her car in attempted carjacking: VicPD 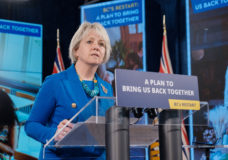